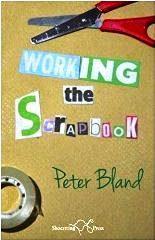 A game is afoot in Peter Bland’s new collection. The first two words in the opening title poem assure us that ‘Nothing’s planned’ – presumably because this is true of the scrapbook to be ‘worked’. The end result however is as pretty a piece of planning as you’ll see in a while. And the poems are drawn seamlessly (you can’t spot them unless you happen to know) from his long career dating back to the ‘sixties. The poem lays claim to a subsequent ‘tribal thriller…a taut page-turner’ – manipulating figures and mementos from a ‘thirties childhood in England through to later poems spoken to his late wife Beryl, who is the subject of a final section called ‘Loss’.

Peter Bland has always known that the core of a poem needs to be alive, whatever is allowed to creep in at the edges – the ripening as it were. Without the core there’s no poem, however rich the taste. The core is what made Emily Dickinson’s hair stand up at the back of her neck. Bland writes of ‘hoping that something will come alive’ and compares it to:

We get a feeling that the talking has always been as fundamental as the fruit, although he insists ‘there’s more to this / than mere gossip and stiff verbs’. He goes on to see ‘homeless poems / crowding the borders, waiting to cross over’ as if exile is necessary for creativity. Poets need to inhabit a world of the homeless, even when they’re at home. Rumbling along in the background are various kinds of oppression, of insiders marginalised and especially borders of all kinds between them and us, real and imagined, life and death.

‘Smile Please!’ prepares us for a number of photo-poems whilst also demonstrating a trick with line-endings that is almost a trademark:

A word at the start of the next line is leaned on with more weight than it might otherwise expect, but the essence of all legerdemain is in its not being seen – a quiet forcefulness. Bland’s two recent books from Shoestring Press are clearly thematic – the first, ‘Remembering England’, being perhaps more obvious as a mini-selected poems. These days, at 83 (he was born in England, lived in New Zealand and is now back in New Zealand after some years in England) his writing comes from a distance that allows him to view past and present together as indistinguishable. He is ‘working the project’ by re-running several of the earlier poems and themes in new contexts, most notably some recurring visits to ‘The Pond’ which is itself helping to frame a manifesto. In it he refers to a past that fosters ‘the illusion of a lost self’, concentrating on a fishing encounter with a boy in a shared place which is vividly sketched as ‘the entrance to another world’ – one visited by his current and earlier selves simultaneously. It’s not hard to see the eighty-year-old fisherman waiting for a bite from something more literary than fish, but the vantage point has to change over time:

Or especially ponds, we might say, and especially if they figure as windows in a psychological landscape that alters in the search for a fixed point. In an earlier poem not included here he had playfully juggled three potential approaches:

Each option is probed for its pros and cons, but we’re left in no doubt that each involves sleight-of-hand and that all are masks. ‘We’ are more than passing strangers, and are also at times exiles, outsiders looking in, and of course versions of a real ‘us’. He’s obviously not fooled by fashionistas ‘who believe the poem has no speaker / other than the language itself…’ This idea of home as an imagined construct is also constant throughout the new collection. A poem for Herbert Lomas, ‘At Aldeburgh’, which made an appearance in a Carcanet Selected in the 1990s, is artfully placed here – presumably for its celebration of settlement:

By contrast, his lot is a necessary restlessness – a trait he’ll ask Beryl to forgive his ‘landing her with’ in ‘Something of an Apology’. He admires Einstein’s idea that ‘all points in time / somehow co-exist’ and in the poem ‘More Bits for the Scrapbook’ he’s offering a poetic equivalent for the kind of emotional arrival implied in that statement. His is ever the quiet voice holding elements of the scrapbook together as he moves apparently randomly back and forth in time. Just as Rousseau’s outlandish visions can be described as ‘simple reportage’ in the poem ‘Viewing Primitives’, so it is correspondingly the case that Bland’s gentle recollections are offered as fictions despite their trust in first person speakers.

One ought not to forget the humour available to such voices in ‘The Walking Dead’ (for me the best of a handful of prose poems) and ‘Flaneur’ with its lament for vanishing city poets expressed in tones similar to those showing sensitivity towards zombies. The former are characterised as ‘aimless hangers-on / without strict purpose or known destination’ while the latter, in a delightful twist, are said to somewhat shyly refer to the rest of us as the walking dead. But the core content of the scrapbook is perhaps that related to photos and to (mostly spoken) messages, culminating in a final sequence of 19 poems for Beryl entitled ‘Loss’. The title poem is the first:

Perhaps unsurprisingly, the sequence rests upon a similar emotional power to many of the other ‘messages’ throughout the collection. The final dream poem assures Beryl that ‘Sooner or later I promise I’ll get to know you better’ (‘There You Are’) and in ‘Click’, the typically understated throwaway claim as to what all this has been about is smuggled past the conscious mind: