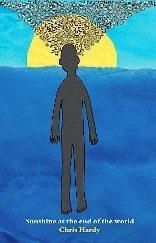 Chris Hardy’s work has a feel to it that I really like. He writes vivid expository poetry having the heft of short stories, which is as it should be, often heavy with portent and mystery. Is it sorrow or absence that permeates ‘Keeping an eye’? As we enter, “After a week unwound the clock has stopped” and we see a “hive of ash” which shivers in the grate. But when we leave, using an old key which “smoothly locks the door”, the clock is functioning once again:

Is this a death foretold? There is an enigmatic wryness behind the startling descriptiveness of this short poem. And this is true of other poems. ‘Behind closed doors’ tells us there’s “a rat scrabbling inside a cavity wall”. It’s un-settling; a metaphor for a dying relationship. The final stanza indicates that the couple:

Perhaps though they are just hav-ing an uncomfortable vacation in some cold damp cottage – something to which many of us have been subjected and survived, or not. But you understand my point about enigma: the poetry may be dry, it may be sardonic, but it is full of meaning.

The title of ‘Do you have the time?’ is itself a freighted question:

In ‘Harbour’ although the old place has changed, “One thing’s for sure – I will be forgotten”. The poet is already lost, and fears to lose more:

Heart-aching words. Am I painting too downbeat a picture of Hardy’s poetry? No, indeed, he writes beautifully, and deals properly with human emotions. Our realisation that the loss of the other is not a willed-for desertion but rather the desertion brought about by death comes a fair way into the collection. It is the poem ‘To sleep’ which is explicit about this – the death of the poet’s partner, or perhaps parent, who is speaking of an impending funeral:

O Lord deliver us from that ver-sion! So I went back to ‘Baggage’, which I had first read as about someone leaving “on a warm summer afternoon” who “flew away deliberately” but which I now re-read as being about their dy-ing. It’s desperately sad; the one who is left behind tells the children that the stars will return to the sky each night, but:

You’ll agree that we all need a little sunshine in our lives. The title poem, however, ‘Sunshine at the end of the world’, leads us to rea-lise that sunshine, like happiness, is relative. “Better to be thrown in the sea / with a lump of lead” than to be buried standing up in a Moravian grave under a “square stone lid touched by spring grass”. I second that emotion.

There is so much in these poems; moments or allusions that may be missed at first reading. But the writing, limpid, pellucid, takes you by the throat:

Hardy’s free verse, as well as pro-viding such arresting images as the wave’s eyelid, flows around his small stopping points, like a stream slipping over pebbles, to give a strong sense of place: “wet tarmac”, “the walkway edging out”, “doors that open glassily”. Or on Salthouse Heath: “Dusk falls like soot / into an ocean.” Wow.

Each of these poems is a story as beautifully muscular and slippery as an eel. So do start again, as I shall, at the beginning, and read with a new understanding. Then allow the last stanza of ‘Auspices’ to bid you adieu: