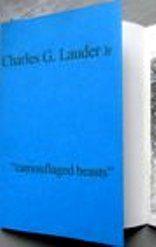 Charles Lauder is Assistant Editor of The Interpreter’s House and camouflaged beasts is his second pamphlet, following on from Bleeds, published by Crystal Clear Creators in 2012.  There are nineteen poems in the collection, beginning with ‘Late in the Evening’ and ending with ‘Aubade’. In ‘Late in the Evening’, the message of the rain, “The rapid tap of rain / is hands on skin”, goes on to alert us to a presiding preoccupation of Lauder’s poems: the numinous, what is sensed, not known:

There is a movement from darkness to light, in subject matter and tone, although the poems mostly provide various takes on the former. The overarching mood is apocalyptic – signalled by Jane Burns’s haunting prefatory illustration of a man falling into a chasm where strange tentacles curl upwards and a cross-section of the rocks on either side reveals what look like screws, cogs and pistons. Literal and metaphorical strata feature across the poems.

The protagonist has been witness to the despolation (by war, fracking?) of innocence in his dream, “How delicate, how vulnerable / like the young to injury when all seems flawless.” He speculates on what happened before he fell: all is indistinct; it could have happened anywhere at any time in history, “ … Perhaps / I had been chained, bound for a new land … / Or had I been a returning soldier …”. He then clutches at other narratives, like the fall of Icarus, “ … I must have been up a mountain, / tumbled from a plane, had waxen wings.” Unknowing of some facts, this Adam is all-knowing of others, ‘”Your heart may not last another year. I have secret knowledge …” Here, as elsewhere, there is something Blakean. Indeed, in the way the poem and drawing interconnect I’m reminded of William Blake’s Songs of Innocence and Experience and their exploration of how industrialization warps the human body and spirit.

There are further dream poems. ‘The Interpretation of Jung’s Dream’ gives insight into a personal psychology at work here and elsewhere:

The poem both describes and performs—via its staggered form—aspects of Jung’s dream of a house with its several layers each referring to a level of the collective unconscious, the cellar, being the most primitive aspect of the psyche, as the poet discovers:

Freud appears in the dream and offers an interpretation “over toast”,

but the poet prefers to side with a Jungian analysis:

and face the darkness where the spiritual and bestial co-exist.

The Shadow stalks the poems: Lauder works the villanelle to sinister effect in ‘running all night’ which (from another dream) relates an attempted escape from a lynching:

The form’s repetition of the first and third lines emphasises the flight and the weariness, and, in doing so, intensifies the horror.

The ‘beasts’ of the title emerge in several poems, ‘camouflaged’, as machines (trains) in ‘There are no horses’. The poem begins with what I take to be a description of a subway:

The feeling of smallness and disorientation when charting the way between stations is all too recognisable. The poet tries to hang on what is graspable and planned, “All that can be mapped, where / you need to be tomorrow”; to miss “a faded, scratched-up tram no one rides / unless they have to” is to leave behind the past. For now it’s the “Chinese steam train … / the fuming snout of a clamorous beast / rising out of the earth.” Is this the future also? We get the sense that we can easily lose our bearings, are never in control and must hold on to the smallest thing – the poet’s eye for metaphor being one of these – to help locate ourselves in time and space. This is certainly the case in the title poem: the actual ‘camouflaged beast’ is “an oil-slicked kitten that won’t be licked / clean ”. The descriptions twist and turn, “curious / as sticking a fork in a socket”; “camouflaged from predators like an owl / feathered in sunflower yellow and burnt-sienna”. This alert poem is precise on the arresting beauty of camouflage which is transformative but also a desperate strategy to avoid danger and to preserve one’s species. I wondered if Mark Doty had been an influence behind such attentive close description.

Lauder’s poems are never predictable. They make us look closely at the world, then look again. ‘The Keswick Stones on the Longest Night’ has a somewhat surreal perspective where the stones are personified as people in a meeting:

Despite this call to order, there is corporate mayhem: “thirty-eight get drunk on a five-finger punch / of power … / They hold rolling races down into the next valley / and try to count the number in their circle / but the number keeps changing …” This is humorous but uses the premise of solstice with its connotations of pagan ritual for a serious purpose to show the anarchic beneath an assumed veneer of ‘civilisation’.

‘Wide Awake’, an almost-prose poem, signals a transition from night to day, sleeping to waking. Another dream poem, its rhythms and images are persuasive, “I swim up from the bottom of the pool. The dream that follows me / was full of red and gold …” We’re in the poet’s house and also back in Jung’s dream house, “My father and uncle / broke into the house while I was away, came in through a skylight / that I didn’t know was there …”, the poet, still looking for “ways to break out …”

‘When You’re Here’ is a love poem where the other person’s presence can ward off what unsettles; “Those moments the rooms stop ganging up on me… / … the fog that haunted my sleep…”. But such presence, is, at the same time, an absence, in discarded clothes, “ a linen shirt / as if life is where you left it”, and, as elsewhere in these poems, something seemingly grasped, is not solid – “like your breath failing to be / as solid as mahogany” – but is unstable and likely to change into another state: “somewhere / in mid-sentence you vanish again / your cup of tea falling to the table”. If entropy is the physical movement in energy transfer from order to disorder, then Lauder’s poems are interrogations of entropy.

There is something more seemingly permanent and substantial in ‘Aubade’, “Dawn has finally grown a backbone / its burning head rises above the horizon / unafraid …” This introduces another ‘beast’ of sorts, a fabulous one; yet the “brilliance” will not last. To be planted/grounded in the moment of looking is what Lauder urges us to do (“notice now before it moves on”), just as Mark Doty has done in his poetry.

The Black Light Engine Room Press has done an excellent job in the design of this pamphlet with its artwork, cream pages and striking blue cover with flaps. These poems draw you in; reap more rewards in the re-reading.