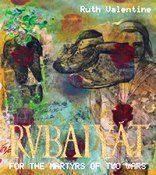 Many poetry lovers will, I suspect, be familiar with Edward Fitzgerald’s Rubaiyat of Omar Khayyám, and could happily quote a stanza or two. The more politically correct among readers will no doubt be spluttering ‘cultural tourism‘ and ‘cultural appropriation‘ into their muesli, but the stupider sorts of political correctness need not detain us here. Whatever we think of Fitzgerald’s versions of Khayyám’s work, it is now part of our cultural heritage, to be enjoyed while we sip tea in our pyjamas on the verandah of our bungalow.

Ruth Valentine, in another handsomely produced pocket-sized book from the enterprising Hercules Editions, has updated and refurbished Fitzgerald’s structural model of this traditional form. Her subtitle, ‘For the Martyrs of Two Wars’, references two conflicts: the first, the Iran-Iraq War of 1980-88. the second, an undeclared struggle on the streets of London and other cities. To be clear, she is not directly addressing the recent terror attacks in London, Manchester, or Paris, although the Iran-Iraq War, the Gulf Wars, and other conflicts may well inform the actions of those who consider themselves jihadis.

Malika Booker’s Foreword notes that Valentine “ laments the fact that the London boys are confined to short newspaper columns with ink that disappears in the rain while boys from Iran star in giant posters.” Valentine’s text is both illustrated and interrupted by photographs of these posters, war graves in Iran, and an impromptu memorial and memorial graffiti in London. The book is also graced by the paintings of Shahram Karimi, which speak eloquently to the subject of martyrdom. Valentines twenty-five rubai, (and a final rubai from Fitzgerald) are quatrains with an aaba rhyme scheme that Valentine handles well, as befits a poet of her experience. She takes the reader straight in:

This use of filmic techniques takes us from sitting in front of a TV to an imaginative engagement reminiscent of Keats’ On First Looking into Chapman’s Homer’. The writer’s ‘wild surmise’ however, is more than a mental journey; in her Afterword, Valentine details the process of actually going to Iran. Back in the poem, we find her impressions:

The poet, if she was ever a tourist, is now witness, compelled to portray these young men, not as warriors, but as family members, students, engineers, and yes, ones too young to suffer this fate :

Back in the sixties, we heard a great deal about the nineteen-year-old G.I.’s, as if this was something new; yet we know from accounts of the First World War and the Napoleonic War, that very young men have always found their way onto the battlefield. Some things, apparently, never change. And then, after witnessing so many memorials, the poet returns to London:

This is happening, Valentine notes, in Lewisham, Walthamstow, Stockwell, Tottenham, Harlesden, all over London, to boys who

An exact mirror-image of the situation in Iran, their killers also boys. What is our politicians’ response?

It does not matter which politicians, or which party they represent, why those boys are martyred in Iran, or killed on the streets of London over disrespect, girls, drugs, being on the wrong street or in the wrong cafe at the wrong moment, it is all equally senseless.

But will the people addressed here, whether the dead, or our political elite, actually wake op and do something positive to change things? Answers on a postcard, or Facebook, please.

Valentine’s Afterword (which readers could usefully turn to first, and then re-read after reading her rubaiyat, and meditating on the accompanying paintings) is informative about Fitzgerald’s text, and its relation to Omar Khayyám’s original rubai. She also makes the point that in her professional life, she worked with refugees, so had a long-standing engagement with the effects of war. Once again, the personal meets the political, to the point that as a woman wishing to visit Iran, there were complications. Fortunately, someone in Tehran decided Ruth Valentine was a ‘suitable person‘to apply for a visa. For that, we, and Valentine, must be grateful. This small book on a large subject is a pleasure to read, and once again, Hercules Editions must be praised for doing the subject-matter justice.