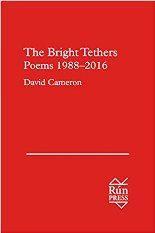 This book overturns all expectations for a first collection. With almost thirty-years’-worth of poems it’s closer to a ‘Collected’ but Cameron has leap-frogged the conventional line-up of slim volumes which generally precede that weighty ‘Collected’. Seán Haldane, the publisher and editor, explains in his introduction that Cameron has had a small number of poems published in magazines and that he won the Hennessy Literary Award for Poetry in Ireland in 2014. This award comes through nomination by fellow poets: a good recommendation. Finding a committed poet who eschews the more competitive routes to publication and who overturns the conventional advice is both refreshing and restorative.

Nor does this book look like a poetry collection. Squat and stocky, A6 in size, it looks more like a breviary or prayer book at first glance and, with its soft cover, handles like one. Rún Press aims to revive the German ‘Taschenbuch’ (pocket book) tradition – and it fits a handbag, too. It’s a perfect size for Cameron’s poems: in general he favours single-page poems, and even where shorter poems fit two to a page they don’t feel over-crowded. These are poems of daily life – the physical, tangible, cluttering, comforting, broken objects and all their associations that accumulate in homes and families. He is not a minimalist de-clutterer – at least, in the domestic sense. His vocabulary and syntax, however, are clear: his poetry aims to capture his own past (for himself) and to make it recognisable (for the reader) – hence the brevity of most poems and the attention to the musical/rhythmic line. “As a matter of fact, all was cracked;/ Rhyme kept the whole shebang intact” (from ‘Rhymed’) is one way of showing how language can anchor childhood memories. Another is by naming:

Cameron is sensitive to the layer of meanings in ‘listing’. At one level his metaphor is almost too simple; at another it touches us directly and memorably, finding out the odds and ends at the back of our own kitchen drawers, and then carefully letting the metaphor slip into those invisible but equally real areas of shame, failure, loss – inner associations that are the painful part of the examined life. “This is the hardest part, to tell/ Your life’s tale, and make yourself visible/ To yourself …’ (from ‘The Flaw’). Cameron’s care in use of rhyme allied to syllabic structures can hold the seemingly slight details together, as in ‘Visit home’ –

Could anyone read this poem without going back to their own childhood? Cameron’s use of ‘Ours …’ in the first line (then repeated, with the emphasis indicated by italics) quietly implies the question: what was yours? Then: what is yours? – what memories are we laying down for future generations in our ordinary, unique lives. Cameron is closely observant of children and their ways of learning. In ‘Etymology of went’ he considers how his son expresses the past while he, the poet, reacts instinctively to the linguistic element –

Within the eight sections that make up this collection there is a personal narrative – love, travel, loss, specific locations – but this operates in an inclusive rather than an excluding way; this is not confessional poetry but a distillation of a recognisable material world and the self-blame which shares the same space. Cameron is a questioning poet, literally: I can’t recall a collection with more question marks. These allow space for contemplation – as in the final two lines of the title poem ‘The Bright Tethers’: “Who will find him, now he has slackened/ The bright tethers that had bound him to his life?” Or they recognise the mix of emotion in apparently-simple actions: here, in full, is his poem ‘Night Singing’

Thoughtful, tentative, musical, human in scale: these are poems which deserve to last.