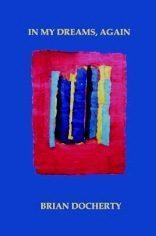 Brian Docherty is a prolific poet. It does not seem to be so very long since his previous collection Independence Day was reviewed in London Grip at https://londongrip.co.uk/2016/03/london-grip-poetry-review-docherty/. And yet here is a new book In my Dreams, Again which is of similar size that shows few signs that he might be running short on inspiration. True, the new book does revisit a favourite theme of real and imagined(?) adventures in North America; but it also offers youthful reminiscences, some excellent ekphrastic poetry and a few narrative pieces that could easily have been reworked as effective short stories. Throw in a couple of acrostics and some prose poems and you have quite an eclectic mix.

Fond as Docherty seems to be of travel, his poems sometimes suggest that it can lead one into oddly unsettling situations. ‘Last Man Standing’ is set in Cuba where “I woke up in the epicentre of silence, / walked onto an empty street with psychedelic Cadillacs…” and found (wonderful phrase) “I was on the wrong side of laid back”. And what was it about “that sign in Abu Dhabi last summer” which required the poet to be “told by expats, Never joke about it“? Sometimes foreign parts can pose more tangible threats , as in ‘The Day I Walked into a Family Feud’ when “…four men burst in, / dragged me out, threw me in a pickup.” Of course, troubles can occur on home soil too, as when “the Fire Brigade drowned my house …” and then “The Black Widow Insurance Co said / receipts; proof; your fault; small print.”

Docherty’s ekphrastic poems are not only based on paintings (by both well-known and less familiar artists) but are sometimes triggered by old black and white photographs. These can give unintended clues about differences between ‘then’ and ‘now’: “No cropping / or editing in those days, what you see / is what was there on the day.” The absence of one parent in a holiday snap is easily explained: “Dad didn’t trust us with the Leica, / and you didn’t ask strangers for help.”

Some of the most successful of the poems based on paintings are those inspired by the best-known images. Thus one group of poems gives voices to characters we can easily picture from Parisian paintings by Manet and Toulouse-Lautrec.

A poem entitled ‘The Thatcher’s Widow’ after a Van Gogh painting has a wonderfully evocative opening “Is the weather melting the landscape / or the landscape deforming the weather?” Also noteworthy is a less-than-reverential commentary attached to Durer’s portrayal of the boy Jesus discussing scripture with the Temple elders.

One of the best of story-poems is ‘Stranger on the Shore’ which might also have a holiday photo as its starting point: “He is still wearing his Burtons demobs suit / even though this is 1952…” The poem moves us with film-like clarity as we pull back from an opening shot of a man staring out to sea and observe “the deckchairs & donkeys, the fishermen” among which his family are occupying themselves – but subject to the injunction “Don’t bother Daddy”. The final verses fade to the flash-back which perfectly explains his preoccupation which makes him “a stranger to himself, / his wife & kids, and anyone who comes near.”

Similarly successful is the atmospheric ‘Photo from the Stasi Archives’ with its “washed- / out colour matching peoples’ lives then.” There are chilling undertones of both fear and collusion in lines such as “How it materialised in my wastebasket / is a mystery I hope went unnoticed” and “I might recognise the boy, if need be…” This poem is one of a group which imagines life in a Soviet-style police state and which begins with ‘Following the Wrong God Home’ (“Could be Stalin, could be Hitler or Mao”). This last is also an example of Docherty’s knack of coming up with arresting titles. Other pleasing instances are ‘What the Walrus Thought’ and ‘The Parrot Ate my Prozac’.

As someone who has read quite a bit of Docherty’s previous work, I was pleasantly surprised to note that, in the latter part of this book, he seems to have discovered a new voice. It would, I think, be fair to say that much of his poetry could be described using words like ‘sceptical’, ‘wry’, ‘hard boiled’ or ‘noir’; but this book’s very apt closing poem ‘One Door Will Open to Another World’ introduces a gentler more trusting note:

The questions continue – “Am I missing a page of the script?”; “For a moment I think it is a ticket, but for what?” – which are not answered and yet lead to a feeling of quiet resolution.

I hope I have now conveyed something of the enjoyable richness and variety of this book. It is of course not without a few blemishes. Docherty likes to pursue long trains of thought and sometimes does so in a single extended sentence which risks taxing the reader’s patience and concentration. There are times too when he seems to over-estimate his readers’ familiarity with details of American life and culture. A stronger editorial hand might have helped here; and would also have helped resolve some small textual oddities such as occur in the opening lines of ‘Migrants, Missouri’ where we find “you / will see notice same thing / every Autumn”. Again, in ‘The Theology of Waiting’, we find “we can live between jump cut / to jump cut” where surely it should be “from” in place of “between” or “and” in place of “to”. On matters of style rather than syntax ‘Last Man Standing’ includes an awkward line break

which seems to me to put misleading emphasis on the last three words. The closing lines of ‘Migrants, Missouri’ – which for the most part is a fine poem about Canada Geese – are

That repeated “here” makes for a rather weak ending and even raises the suspicion that two alternative last lines have both made it into the final version. The possibility of such an error in proof-reading is not reduced by the observation that Contents pages feature line numbers that are slightly incorrect.

It is part of a reviewer’s job, I think, to point out shortcomings such as those in the previous paragraph. But they are, in truth, minor imperfections and do not significantly detract from the pleasure the book offers – not least through its liberal sprinkling of arresting images of, for instance, “identikit villages all closed for lunch” or a  “quiet life of pickles and rainwater” which might follow some global disaster. All in all, Docherty has given us another substantial and satisfying collection.