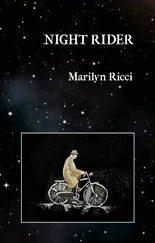 Night Rider by Marilyn Ricci is a perfectly poised collection of poems, dealing mainly with poignant reflections and memories of the poet’s parents. The style of writing is skeletal (adding to the poems freshness) and versatile in its simplicity and in its use of diction and metaphor. Also there are a couple of poems which enter into a philosophical mode of questioning, belief and the reason for existence; but they do this with a light touch and so are easily accessible to the reader. Ricci’s description of the mundane is both precise and inquisitive.

“People Hannah fears at work” is an entertaining poem about the poet’s mother’s fears of some of her work colleagues. I like the way the poet describes the melting pot of people who are the figures of her mother’s fears. There is “Renee, the supervisor, who never cracks a smile.” And “Arthur, one of the knitters, who thinks he’s a right/ to block the entrance to the ladies’ lav,/where Rita and Shirley are having a drag,” and “The lad in the office who seems a bit mental,” I think anyone who reads this will recognise and relate to such characters and the picture the poet paints is both engaging and accessible.

A companion poem “Things Hannah likes at work” has a self-explanatory title and begins with “Trimming the machinery/with paper balls and chains/ and crude balloons for wedding days.” Poems like this show the overriding affection the poet has for her mother as well as offering a subtle and unique insight into what she was like. The poem concludes: “Christmas Eve is always best:/swaying tinsel and spiralling twists.” and “Passing round the under-bench gin/The blokes next door locking themselves in.” A fabulous poem as it evokes the scene with such adroitness.

The poet’s poems about her father like “Con’s life in print”, “Why Con hates the perfect binding process” and “Twists” are similarly succinct in their vivid expression of sentiment, affection and description.

“The Picture Palace Tea-Room” is a descriptive poem which evokes the atmosphere of the scene perfectly. It starts, “Outside rain taps the windows,/blurs the signs. The waitress brings/stainless pots, milk, steaming jugs,/plates of fancies.” The next stanza dextrously uses metaphor to put words to the picture: “The young woman chooses meringue,/nibbles into crisp snow, her first lipstick/pink on white”. The penultimate stanza sees a “young man” who “adjusts his tie, watches/the waitress in her skimpy apron,” and furthermore” he can smell/damp hair, sees the girl with fresh/cream on her lips.” This vista is so vividly portrayed that 1) I want to be there and 2) It excites the senses and the poet must be complimented on her versatile and powerful descriptive powers.

Other characters drift into the work including the poet’s husband as mentioned in “First flat” which begins:

This poem seems to deal with an argument or moment of ill-feeling between the newly-wed couple as:“You left long before the click of the lock.” and then

while her husband was “sad, angry, at our window,/clamouring for attention.”

The poet’s ability to make her characters so believable and the situations they find themselves in so realistic and to do so with such openness and emotive skill, is one of the major attributes of this collection and why it makes it so appealing to read.

“Soft gown” touches on the philosophical; and this short poem ends with:

One of the last poems in the collection “The way things often go” follows a similar vein of philosophical thinking.

In conclusion, there is much to admire in Marilyn Ricci’s Night Rider: its poignant sense of place and time; its eloquent and extremely plausible use of description; its benevolent sentiment and the flowing and articulate way it is written. A must-buy for any poetry lover!