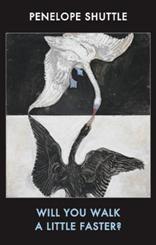 Prominent in Penelope Shuttle’s new collection are poems about Bristol, London (with particular reference to the Shard), and the human heart. For those who know Bristol and its transport system the reference to buses that “change their route numbers / as often as you change your mind” will need no explanation. References to the Henleaze area of Bristol will to most readers be more opaque: she refers inter alia to the (now defunct) 54 bus, the Henleaze Waitrose, and the Orpheus Cinema. To those who like myself have travelled on the first, shopped in the second, and watched movies in the third the names inevitably bring with them highly particular associations. What, however, of those readers – presumably the majority – who haven’t? What does somebody not familiar with the city at all make of a poem like ‘Girls in Bristol’ which manically lists names of places which pass by in a rapid blur as if seen from the window of a car or a bus – such as Cabot Circus, Cribb’s Causeway, Bread Street, Gloucester Road, not to mention “that old pet shop in Bedminster”? The answer surely is, Quite a lot, given that names in Shuttle’s poetry tend to substitute for places rather than simply refer us to them: it is the magic of the names themselves that gives this poem its impetus as much as the realities that those names signify. Further, despite her insistence on the familiar particulars of contemporary life – she refers to “my Kindle / my password / and my shopping” and mentions in passing Al Jazeera, faith schools and Waitrose check-outs – her poems are more about creating a new sort of reality in poetry than in any straightforward fashion representing that which already exists.

In her poems about London she is aware of the past as well as the present, not only her own past but the history of London itself, half-concealed in its changing street names, buried in layers of stone under one’s feet, hidden in the routes of its underground streams. The London that Shuttle gives us is often not one so much one of or in the streets as much as it is deep below or high above them. In ‘Walking the Walbrook’ she invokes the

the river that “no one will ever / restore to the light”. London’s great new towers such as “The Pinnacle // The Walkie-Talkie / The Cheese-Grater” never dream that “a river lies under their feet.” This is a poem that (before it unfortunately fizzles out) has great energy in its characteristic short lines and incantatory concatenations of names. The Shard is seen (among a good many other things) as

She also sees it as “like god’s ever-lit bulldog-breed cigar”, one of her more whimsical coinages. Her London is also the visionary city that Blake saw. In the long poem (or poem-sequence) ‘Passages’ her hermetic references left me cold – for example, I have no idea what “Icy hell is a pink rose” is intended to convey – but there are also lines that convey a sense of urgency and excitement:

Elsewhere we have in ‘Quiet City’ in more meditative vein the memory of “trees in Richmond Park, / the sky’s lovely struggle with light, / a day full of too many days.”

She has previously told us that “poets shouldn’t be troubled with hearts / especially their own”. For all that in the present collection there are no less than six poems which are so troubled, including the poet’s address to her “Arthurian” heart which – impossibly – “worries me / from one end / of the Round Table / to the other”. It is not a matter of deciding between head or heart: the question becomes insoluble when the heart is doubled as in ‘Both Hearts’, one of which likes things that the other does not, though in the end there appears to be a bemused blurring between the two: “This heart liked bread and butter / but so did that one,” the narrator tells us: “Often / I couldn’t tell them apart.” Typically, Shuttle’s poetry operates on the verge of meaning, or moves in and out of sense, and sometimes gloriously defies any settled reference. When she offers us what looks like a lesson on logic it is on her own terms. ‘Opposite’ begins, unexceptionally, with the statement “The opposite of night / is day”. In the next stanza we are told that “The opposite of water / is beer” which makes a kind of sense, given the reference to Siberia. When, however, we are then told that the “The opposite of food / is sleep / and also dreaming” we see that Shuttle’s apparently wonky logic is an oblique way of telling evident truths. The poem ends with a vision of the stars as being “the opposite of telling lies” though they sparkle “with never a word of thanks / from god or man”.

In this new collection – the appearance of which marks Shuttle’s seventieth birthday – there are no signs of flagging energy. Here are poems characterized by short lines, a simple direct syntax, minimal use of punctuation, a vernacular language marked by such words as ‘grunty’, ‘blingy’, and ‘loony’ – poems that have an irresistible sort of mad humour: they take off like rockets and we never know quite where they are going to land. We are taken to places that clearly do exist in the real world, such as Oxford and Siberia, Lidls and Asdas, along with places that might exist (I couldn’t find Hvallator on the map and Google wouldn’t tell me what “voes” are), and also places that don’t, but should, exist, such as Easy Street, where no one lies fretting at night, but there are never any houses for sale. Besides the outrageous punning and linguistic high jinks that are so characteristic of her work, however, there are more straightforward passages, reflecting on the passing of time, and the sheer weirdness of being alive. “Strange to be the same person / after all these years”, she muses. She suddenly recalls an old film she saw many years ago, Clare’s Knee, and thinks of how much of experience just falls away: “lots of old films I’ve seen / and forgotten.” More poignantly, she finds that, as she gets older “Alone comes along / like no lover I’ve ever known”. In these moods what she looks for is a “quiet moment / found at the back / of everything”. Shuttle’s poetry is typically vivid, fast-moving, linguistically vital, and has an immediate impact on the reader (or listener: most of these poems simply cry out to be read aloud); but, for all the directness and simplicity of language, it is not simple-minded. Indeed, it falls often into aporias or self-contradictions, endings that are not quite endings, as with the very first poem in the book, simply titled ‘My Life’, which closes with the lines

There is no full stop – few of her poems end with a full stop – and rightly so given the inconclusiveness of their conclusions. She is a more tentative, more vulnerable poet than at first appears. ‘Maybe’ is full of calls to action – “let’s go into this café / shall we / let’s do something”, but is finally irresolute: there may be signs that are favourable “but I’m not sure / I’m not sure”. This is a richly various volume, one which will delight her many admirers, and deserves to make new converts of those previously unfamiliar with the world (or worlds) that Penelope Shuttle opens up to us. She has elsewhere spoken of the well-kept secret that poetry can be fun, and her poems do indeed convey a sense of fun, broaching as they do serious themes without relinquishing a lively gift of wild and often sardonic humour.