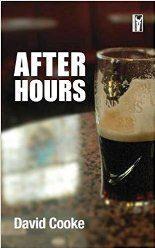 After Hours is a thoughtful, lyrical collection of poems on aspects of family life. Interspersed with the other poems is a sequence inspired by photographs by Willi Ronis (1910 – 2009). In one, ‘Le Nu Provençal’ a woman “like Eve in exile” is going through her morning routine,

It doesn’t just describe what’s in the photograph, but imagines what’s playing on her mind and how she prepares for the day that lies ahead. The sense of resignation is mirrored in the black and white photograph where the woman stoops over the basin, her back to the viewer, only the top of her head just about visible in the mirror not looking at the open top half of a stable door which reveals the sunshine outside.

In ‘Piano’ the narrator buys one for his children to learn to play, having wanted to do this himself when he was younger. The narrator eventually signs up for lessons in a class run by Kate (the ‘she’ in the extract),

The notion of people being described through the lens of treasured objects is revisited in ‘Last Orders’. In this case the object is a 1970s’ home bar,

There’s less regret about getting rid of the bar than the piano. The memories the bar evokes are warmer, a reflection of the fact the bar-owner was better known than Kate the piano tutor. The junk mail suggests the bar-owner’s stories weren’t always true, but were always good to listen to. However, the best publicans are listeners, not talkers, so, although the poem is a fond memory, it acknowledges its subject’s faults too.

The collection isn’t just about family, ‘Lines for a Fighter’ is written in memory of Muhammed Ali,

Fourteen year old Emmett Till was lynched for allegedly flirting with a white woman (later the allegation was confirmed as false). Easy to see how that could provide inspiration for another black man to start boxing. Although I don’t think “no-hopers” is quite the right phrase; it diminishes Ali’s achievements by suggesting his boxing skills weren’t tested.

After Hours isn’t just about those who have passed on; other poems look at the wrench of adult children leaving home and turning out all right. One section is based on a trip to Florida and includes, ‘Loxahatchee’

I think all tourists identify with the desire to move away from the tourist spots and enjoy a “real” taste of wherever they’re visiting.

After Hours shows a quiet craft that explores how the past shapes the present and how memories (even negative ones) inform behaviour. David Cooke’s measured voice gives the collection a sense of unity.