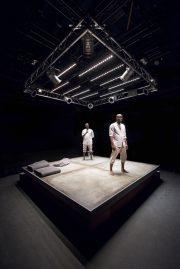 Art is at its most powerfully dramatic when it gives voice to the oppressed.

By using the device of a play within a play to utmost effect, The Island communicates the oppression of a recent generation by drawing on tragic defiance from classical times.

John Terry’s astute direction emphasises the play’s deceptive simplicity and economy, while building up the layers of meaning and the resonance of the language.

Edward Dede as Winston and Mark Springer as John live out the poignant intimacy of a relationship between noble soul-mates tested to the limit, but whose spirit is never broken.

It’s a bond with Beckettian strains of absurdity and the dark humour of a couple absolutely dependent on one other.

In a confident test of the audience’s attention, the action begins with a full 15 minutes of mime as the Robben Island inmates endure a day of particularly hard labour. The only sounds are the prison siren, passing boats and the grunts of the exhausted prisoners, sweat running down their brows. Already, the relationship between the two is emerging as Dede’s Winston, slighter than Springer’s John, is closer to collapse and depends on John to shelter him from the third character who never appears – the dreaded Hodoshe, their guarder, task-master and symbol of the hateful apartheid state.

Eventually, after we have shared the sense of time dragging so painfully, they are forced to run, shackled, back to their cell, a relative haven even if the only comforts are a bucket of water, tin mugs, a rag and blankets – all of which play their parts in the action.

The cell is the space for recovery, human bonding and secret rehearsals for a prison production of Antigone – as once performed by Robben Island’s most famous inmate Nelson Mandela.

In turn, the story of his performance was worked on in secret by Athol Fugard, John Kani and Winston Ntshona for a production at The Space in Cape Town in 1973 in defiance of the apartheid authorities who made it illegal to discuss conditions at the prison in Cape Town’s stunningly beautiful bay.

As Dede’s Winston is forced into the role of Antigone, whose crime is only a crime because the law says so, and Springer as John takes on the role of the tyrannical king Creon, we explore not only the relationship between malign authority and victimised citizen but between two inmates who must constantly resist in order not to be broken and betray their own humanity.

There are moments when we suspect John of oppressing Winston and then there are times when Winston might seem to merit a stern hand, but their spirits endure; never more than fleetingly are they images of their hateful masters.

Gripped and tense, we watch the reaction as John announces his promise of early release and Winston shares his joy before spiralling into taunts, jealousy and despair at the anticipated loss of a cell mate.

Built up to fever pitch as John’s own personal liberty, not just an abstract ideal, hangs in the balance, we at last get the performance of Antigone, as produced by cell 42.

Just as in the original Robben Island production, the only stage is the grey floor of the prison and the only props are blankets, an improvised straw crown for Creon, straw hair and a necklace of nails for Antigone.

No longer laughing as we once did at the incongruity, we grasp the significance of every word as Dede as Winston as Antigone lays out the absurdity of the law and Springer as John as King Creon, Antigone’s uncle, declares the law is to ensure the fatness and happiness of the people and keep the rats from gnawing at them. Finally, he declares his sentence: “Take her straight to the island to wall her up in a cell for life.”

The Island has become a metaphor for a society without freedom unless you have power.