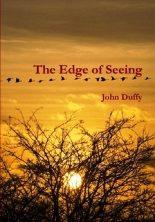 .
John Duffy’s poems are focused observations on humanity and the natural world from the perspective of community and interaction. ‘The Boy’ could be both an observation of another child and something from the poet’s memory:

The adults have long lost their childish sense of wonder in the everyday, but the boy, who is experiencing most things for the first time, still has it and holds on to it by keeping it private from the adults.

‘Glimpsed’ also contains the idea of a private observation. Here the narrator has earlier seen a rat noticing him and deciding he’s not a threat. The poem ends

Readers aren’t just being invited to draw a simple comparison between the rat and convertible driver, but also to note that the driver hasn’t seen the narrator as a threat and will continue trying to impress his passenger. It’s left to the reader to decide what happens next. It should be noted though that the interactions between driver and passenger are passive but the driver seeing the narrator is active.

Another poem, ‘Fulcrum’, looks at a power balance. It starts by describing “An event’s a cloud /overhead” and ends

A crying baby and tired mother is commonplace, but the bomb is a surprise. The implication is that the other woman is not an active suicide bomber but the pair are hostages, each carrying a cargo that has to be handled with care. One represents a future, the other death. Both options only kept open as long as the women can find the energy to do so. The rhyme-echo in “mother” and “tether” in the first quoted stanza and alliteration in the final sentence are deliberate, underlying the women’s roles, their tension and their trust that neither will give up. Trust between parents and children is a theme picked up in ‘Tensile Strength’,

‘In the Pakistan Kashmir Welfare Association’ lunch is shared after reading poems by Raymond Carver,

The silence of eating is both a contrast to the lively discussion beforehand and a suggestion that eating is a serious business. There are no surprises here, just a companionship between people of different cultures drawn together through sharing experiences and finding they have more in common than first assumed.

These are poems that draw readers to their quiet observations whilst not telling them what to think or what to conclude. They show their craft in carefully chosen textures of words, pulling together layers of meaning and sound-patterns. Through The Edge of Seeing, John Duffy aims to pull the periphery into view and invites readers to think in a new way about what looks ordinary.