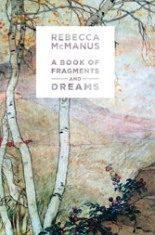 It’s hard to imagine anyone might buy this book unware of its tragic backstory, but it’s worth pointing out to the reader here that this collection, the literary remains of Rebecca McManus, is a posthumous collection pieced together lovingly by her family and friends. McManus was struck and killed by a speeding driver back in 2014 while she was waiting at a bus stop. She was 21 at the time and was soon to graduate from the University of East Anglia with a degree in English Literature and Creative Writing.

When I first picked up this collection, I tried to think back to what I was doing when I was 21. I was a Literature student too, and involved in many of the things McManus’s poetry explores – travelling and enjoying a busy and sometimes boozy social life that often lead to some sort of drama: ‘Went to Wetherspoons / to spend twenty quid on an argument’ (from ‘St Patrick’s Day’). But at 21 I was far from getting my act together as far as poetry was concerned – I doubt I’d published any poetry at all and much of what I did write was drivel. This highlights one of the difficulties for the reviewer with a memorial collection such as this. It’s very tempting to praise the poet’s precocity, marvel at their sense of drive and identity while still so young, but this is surely a patronising note to strike – everyone develops at a different rate. But it’s unusual to come across this situation in poetry, as even poets who did die suddenly and not of their own choosing (such as John Riley or Ian Abbot) still managed to sample a decade or two of adulthood that McManus has been denied.

It’s pointless to speculate about what she might have done. The poems continue to be living entities that will find new and appreciative readers but it’s a shame that some have taken on a whole new significance, poignancy or resonance since McManus’s death that the poet herself never intended: ‘can we live happily ever after?’ (‘Some Philosophy’), ‘I want my children to be musical’ (‘Untitled’), ‘And no doubt I’ll see you again’ (‘An Outpouring of Grief’), ‘Tomorrow I might start a new life’ (‘Pretence’):

And most painfully the closing lines to ‘The May Bug’: ‘I too walk by the cars to prove I’m alive / and they miss me every time’.

While it’s clear that McManus’s main desire in life (such as her Raymond Carver-esque ‘Little moments when I realise I am loved’ in ‘Things that make me smile’) was to be happy and her poetry was a process that allowed her to work on and articulate that as well as find her way in the world, what is most impressive of her work is her ability to see shades and grey areas between the simplistic black and white oppositions of happiness and sadness:

McManus’s controlled (‘perfectionist’) poetry also holds back in places and isn’t the sort of messy Confessionalism I’d have no doubt written and indulged in when I was her age. And the dreams suggested in the overall title of the book do not for a moment suggest that McManus was divorced from the real world in a cocoon of self-delusion or absorption. Take, for instance, these acutely self-aware lines from ‘Lie’, a poem about dreams and lies:

McManus also clearly had an eye for an arresting image that makes a good poem: ‘the carpet, darkened by twenty odd children growing up’ (‘Untitled’), ‘secret rain, generously saved / For when there’s no-one to fall on’ (‘3AM’) and ‘The sun / like a penny that hadn’t yet dropped’ (‘West’). Yes, there is ample evidence here of a poet who would have gone on from strength to strength, but where does such an observation get us? It’s also not helpful to merely reflect on the loss of such a voice, especially when the poems seem to be all about conjuring up the spirit and energy to carry on in a hectic and sometimes uncaring world. It’s called A Book of Fragments and Dreams, not ‘poems’ and while I’ve already spoken about the dreams, it’s true that some of these poems are little imagistic or lyrical ‘fragments’ – McManus herself writes:

I’ve already said that McManus’s poetry is very self-aware and deeply thought but here she is a little mistaken. She has written some fragments, but she’s also written many poems as well – there’s a book of nearly 200 pages to testify to that and to the worth of her existence. All the things she wished she could do here, she achieves in her poetry as well as facing the ‘ruthless facts’ in the face of idealism, at all times trying to affirm the positive. We’d be doing her work a great disservice to approach it in a purely elegiac light.