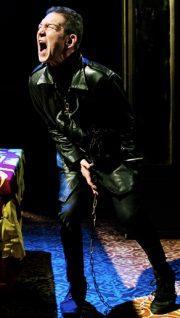 Richard III manages to be at once resounding royal propaganda and an unsettling reminder of the fragility of the status quo given Elizabeth I’s lack of an heir: the Tudors had rescued the kingdom from the murderous House of York, but they hadn’t secured the future for long.

The rich complexity of Shakespeare’s ambiguity feels so relevant to our own anxiously political times that performance is almost reckless.

But director Mehmet Ergen wisely resists the temptation to draw any crass parallels and lets Shakespeare’s language do the work, along with a linear plot that hinges on Richard’s relentless rush to kill anyone in his path.

The clarity of the direction and powerful articulation of the text is complemented by the stark simplicity of Anthony Lamble’s design that splits the stage into a higher and lower level. We can look down on Richard, the dog, the hedgehog, the hell-hound, and look nervously up as he chases the souls of so many of his relatives to heaven.

The greatest clash between evil and innocence plays out as the young princes are murdered and scenes that could in other circumstances be over-sentimental dramatically draw out the essence of Greg Hicks’ lonely, tortured, psychologically-convincing, dangerously thin-skinned Richard.

For once sincere, he winces ominously as the princes, played alternatively by Cameron Lane or Aiden Layton and Samuel Billington-Farmer or Alex Leppard, tug at the chains that hold his twisted body together.

Then it’s his turn to mock, while the rest of the world weeps, as he plays with the toy plane that had belonged to the dead princes.

Another strength of this production is how it underlines Richard’s closeness to his ice-cold allies Buckingham (Peter Guinness) and Catesby (Matthew Sim) in contrast to the chasm between him and all the women of the play, who forecast what the power-seeking men flatter away or fail to see.

Richard is loneliest of all as he is cursed into battle by the one woman who might have loved him unconditionally – Annie Firbank as the Duchess of York, his dry-eyed, enduring mother.