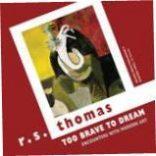 It is an unexpected pleasure to be able to get hold of a ‘new’ collection by the late R S Thomas. The poems themselves are not new, of course. They appear to have been written between 1987 and 1993, but they have only recently been discovered; and previous to that they had probably not been seen by anyone other than their author. This makes them even closer to newness  than those in the relatively recent Uncollected Poems of R S Thomas  – see https://londongrip.co.uk/2013/10/poetry-review-autumn-2013-thomas/

The poems in Too Brave to Dream were found several years after the poet’s death in 2000. They were interleaved between the pages of two books of modern art reproductions that were among volumes from Thomas’s personal library that had been acquired by Bangor University. Thomas had published some ekphrastic poetry in the 1985 collection Ingrowing Thoughts; but his poetic responses to the images reproduced in the present volume remained as notes and sketches which seem never to have been offered as submissions to magazines.

There is a risk of course that any poems which a poet has left unfinished may turn out to be something of a disappointment – at least in comparison with the poet’s best work. Broadly speaking, however, the poems in Too Brave to Dream avoid that risk – although the first poem does not entirely set the reader’s mind to rest. Responding to Matisse’s Odalisque with Turkish Chair (a picture of a courtesan with a chessboard) Thomas includes the rather glib comment ‘you must play her / at her own game if / you would have her mated’ – lines which, one feels, he might subsequently have wished to refine. Matters improve on the next page, however, where Thomas has left us two responses to Derain’s Portrait of the Artist and we can see some development of initial ideas taking place. In the first piece Thomas homes in on a question of identity: ‘No self-portrait / but one of the artist / posing to his palette.’ This rather detached tone is replaced in the second poem by a much more anguished voice of an artist ‘confronted … with his anonymity’

This is vintage Thomas – an urgent and uncompromising cry of protest against the perplexities of solitude.

There are two other images that have prompted either a two-stage response or perhaps two distinct ones. Magritte’s La gravitation universelle depicts a hunter in an enclosed courtyard and in the first poem Thomas remarks that ‘the enemy is not outside / but in with him’. In the second, longer piece Thomas rephrases this thought as ‘he is part / of what he resists’ but then looks beyond the courtyard walls where, surprisingly,

Both of Thomas’s reactions to Picasso’s Interior with Girl Drawing home in on the subject’s breasts (described variously as ‘flat’ and ‘out of place’) and her ‘moustached eye’. In one case she is seen as something of a victim to be led ‘trembling onto / the floor for the last dance / amid the conniving dustbins’. Not content with that wonderfully eccentric final phrase, Thomas moves on to a second version which puts her much more in control

Several of the images date from the war years 1939-45; and it is Henry Moore’s Shelter Drawing 1941 which inspires the poem which gives this book its title. The poem’s first half considers the dreams of the figure sleeping through an air raid; but it then opens out to thoughts of the bomb-damage above ground

Wartime associations seem still to have been quite vivid for Thomas and Paul Berçot’s Birth of the Siren also arouses them alongside mythological ones. The accompanying poem speaks of the Siren’s re-birth ‘in warning now / of the approach of aircraft / or of pain’s temporary all-clear’. Memories of World War Two even make their way into Thomas’s response to a 1905 Munch painting House in Aasgaardstrand where he sees a group of people waiting for time ‘like the Gestapo’ to come with ‘its van to take them away’.

Some of Thomas’s most common themes are almost absent from this collection. God makes only two or three low-key appearances. Alongside Yves Tanguy’s Terre d’ombre He wanders in ‘a graveyard with tree / stumps for head stones’ and is portrayed as less-than-omniscient, finding Himself

Thomas’s other favourite protagonist ‘the machine’ only appears once, alongside Roland Penrose’s The Buskers. This painting evidently puts Thomas in mind of Yeames’s famous imagined scene from the English Civil War, entitled And When Did You Last See Your Father? Thomas supposes ‘the machine’ to be the interrogator; and when the question is asked ‘in reverse’ he tells us that ‘the reply of the machine is /it does not have a father.’ This same poem includes a wonderfully bleak encapsulation of the self-perpetuating nature of war:

This collection also includes a few examples of an aspect of Thomas’s writing that I had not noticed in his work until some of the pieces in Uncollected Poems – namely a capacity for mild sexual innuendo. Thomas’s response to Restaurant Scene by George Grosz describes a flirtatious encounter between a man with a ‘cigar /suggestively erected’ and woman who, at one point, asks him ‘Was it as big / as that?’

Such frivolity aside, however, the last extract I want to quote comes from one of the finest poems in the book which seems to be more obviously the work of R S Thomas, the priest. I like to speculate that the following lines relate to – and interestingly emphasise the collective application of – St Paul’s words in 2 Corinthians 3:18 And we all, who with unveiled faces reflect the Lord’s glory, are being transformed into his image with ever-increasing glory.

Of course the well-reproduced images – presented here in colour when Thomas only had them in black and white – make this a book to be enjoyed on two levels. It is however beyond this reviewer’s pay grade to comment on the pictures themselves or the extent to which the poems complement the art. Fortunately such questions are considered in a substantial and very readable introduction to this collection, written by the editors Tony Brown and Jason Walford Davies. This introduction also draws on other archival material to discuss a number of influences which may have affected Thomas during the composition of these poems.

It is surely too much to hope that R S Thomas has left his admirers any more undiscovered surprises. But to receive this delightful cache of (slightly unpolished) treasures is rather like getting an unexpected and delightful bequest from a long-lost uncle.