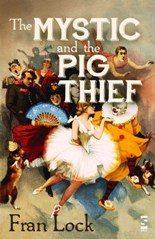 Having made her mark on the London open mic and spoken word scene, Fran Lock published her first collection, Flatrock, in 2011, followed by a third-prize placement in the 2014 National Poetry competition with the poem that first brought her to my admiring attention, a sexy, hectic romp of a piece about the love life of a Luton-based gypsy girl (the speaker’s words, not mine). Despite that success, this second book, published over two years ago, has not been as widely reviewed as its author had a right to expect.

Lock’s default style can perhaps be described as full-on, piling on the drama, intensity and messiness of life on its murkier or more marginalised fringes. She has remarked that ‘violent trauma demands and generates its own particular kind of literature, one that resists linear strategies, orderly narrative habits’. This conscious disorderliness spills over into lexical choice, and in that context what seems to be her chief flaw can also be seen as a virtue, with her fearless approach entailing a willingness to risk quite frequent ersatz collocations that don’t always hit their mark. Reading her means accepting that her voices emanate from characters whose stability and consistency fall short of the full ticket, and who are often embarked on an experimental journey that’s more like a delve into their own psychic darkness, so the odd failure or false note is inevitable. To my mind her deeply unreliable narrators win clear points over the cosy over-polishing of less ambitious poets.

A striking instance comes in ‘SM1 Suite’, one of those in the first 40 pages which precede (and thematically foreshadow) the book’s epistolary main body. Its three parts trace the social rise and initially unlikely metamorphosis of a tough and streetwise London-housing-estate-residing Irish nanny/childminder, patronised by her bourgeois employer and forced to pander to teenage kid-hordes….mobiling each other for viral posterity, into what is ostensibly a very similar persona to the one she used to despise, except that Ireland still sings like a chip pan fire in me.

The second part haunts me as much as anything in the collection, with its boldly jarring adjective noun pair-ups and shunted-together compounds typifying Lock’s unique manner:

In Mystic proper, a spiritually restless woman, again of Traveller origin, departs from Lock’s previously invoked fictional town of Flatrock in Northern Ireland, seeking a new home elsewhere in Europe, geographical and/or metaphorical, and leaving behind a shady, underworld-dabbling lover/partner who plans to marry her, despite strong suggestions that she has had other liaisons on her travels.

Assuming Pig Thief’s words here are indeed the literal truth, might he once have been her pimp, before they fell for each other? We suspect such wonderings can never be resolved because Lock’s work, in her words, is a mechanism for resisting being known which denies ultimate disclosure. She gives us a complex and deliberately inconclusive portrait of protagonists that never fit in anywhere (recalling Dylan’s immortal always on the outside of whatever side there was), who are both, in their different ways, torn between extremes of vulnerability and resilience, tenderness and violence, entrapment and freedom.

On Pig Thief’s sudden and unexplained death (possibly related to his gang activities) just after Mystic returns to Flatrock, she writes to his homebody brother Frankie, couching her sorrow in terms that as well as invoking Hamlet encapsulate some of the paradoxes in which we sense Lock herself half-revels, half-writhes:

In fact Mystic is wrong in this prediction, because in response to her continued letters, Pig Thief re-emerges as a correspondent from beyond the grave, offering her an often humorous Troilus-in-Troilus-and-Criseyde-like bird’s-eye perspective on the events he now perceives from the afterlife.

If there is a thematic crux in a 120-page welter of material, it could be the ending of ‘January 2006 From the Road – Location Unknown’, where Mystic pins down the ultimate (if necessary) fruitlessness of a search for a spiritual home when one’s spirit is inherently restless:

Frankie has already expressed a similar notion in his reply to the funeral day letter she sent him, as he advises her to resume her travels:

Looking in from outside, he possibly understands her better than does his more involved brother. Where Pig Thief had cast impatient scorn on her cross my palm routine, which has been the basis of her self-maintenance in England, Frankie urges her to keep travelling and embrace her cultural richness:

However, even amidst the apparent assertion of support, there could be a sardonic note in that precious, and the connotations of bullet – hard-headed to the point of obstinacy – put self-contained into a more negative perspective than might otherwise be the case. These caveats, if such they are, surface more fully at the poem’s end, where blessing seems to co-exist with dismissal:

Packed powder perhaps comes under the heading of collocations that don’t quite come off, and I can’t work out seeing spark, but the final line strikes us with a repressed, bitter power that says much about the hidebound, frustrated environment that Mystic is set to leave once more. In inventing Flatrock, was Lock again thinking of Hamlet (weary, stale, flat and unprofitable)? In an interview, she described the place as this sprawling psycho-geographical landscape…unpleasantly suggestive in all the right ways: you lift a big flat rock and all the bugs come crawling out of the dirt and dark. One wonders what bugs will crawl from her forthcoming book, Dogtooth, due out next month, which doubtless will be no more for the squeamish than the rest of her wondrously imaginative and often deeply unsettling work.