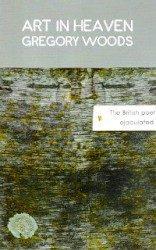 The late, great Peter Porter once observed that Gregory Woods was probably the most accomplished of contemporary formalist poets, which, if you pause to think where such praise comes from, is not merely a copper-bottomed endorsement but outstandingly generous. And yet it’s no more than Woods deserves. Look on his work, ye formalists, and despair. Art in Heaven is made up of thirty-four sonnets in impeccable trimeters and one, perfectly poised, twelve line poem which breaks after the sixth line. For the rest, the volta always occurs between octave and sestet, and given the emphatic closure that seals off the eighth line of each sonnet it’s pretty amazing that Woods manages to avoid any suggestion of repetitiveness. This may not make for art in heaven but it’s certainly art of a very high order, and remains so even if allowance is made for the fact that trimeters are easier to manage in English with its plethora of monosyllabic words than would be the case in many others. (Try it in Greek!) Besides, when a six-syllable word turns up in the sonnet “God Is Love” it does so with a devilish, unsettling wit.

is how the sonnet “God Is Love” begins, and it continues,

Penitence feels as uncomfortably close to pestilence as crypt here does to the secret worm of AIDs.

Art In Heaven doesn’t comprise a sequence, but certain themes recur, and the voice that utters each sonnet, though varied, is consistent in its measured control whether expressing content or contempt or some richer emotion, as in “Whitman at Timber Creek”, where the speaker recalls how a man who shared his bed

Use of the present tense here makes immediate an experience which, although time-bound, endures, as does that in “Hold It” (the title extends to more than the photograph being recalled) which speaks of how “what remains of our / skin-deep intensity / still makes me laugh for joy.” The apparent oxymoron “skin-deep intensity” may seem sardonic, but as the following – last – line makes evident is far from being so. The pleasures of the flesh are real enough.

But they are balanced against the kind of cool, measured appraisal, which is habitual to Woods. In this, as in other respects, his work invites comparison with the best of Robert Graves. He serves the muse by an intricate mastery. The first poem in this collection, “A Distant Cousin,” brilliantly establishes who’s in charge here. For its air of Jamesian comic scrutiny to be properly appreciated – James is another point of comparison – it really needs to be quoted in full, but perhaps it’s enough to note the opening:

and also its closing, “It never does much harm / to ruffle peacock feathers”, in order to register the half-amused, ruthlessly ironic, unyielding note that characterises much of Woods’ work.

You make your bed and you lie on it. But Woods is far too intelligent, self-aware and accomplished a poet to surrender to the self-pitying implications of this cliché. Hence, “City of Love.” This is the poem which falls two lines short of sonnet status (why? In the interests of bare, un-artful truth-telling?), and in its “honest” recall of an affair now presumably past plays with the current fashion for warmly commemorative plaques affixed to park benches, in order to say that

Not even Rimbaud could have improved on that.

Cavafy is an obvious point of comparison, but Cavafy’s ironies are more pliant, his tone of languorous regret either not within Woods’ register or anyway not one he chooses to call on in this collection. This isn’t so much a criticism as a way of remarking what is remarkable in his work. I can’t think of any poet who so adroitly manages what is often tricky, even recalcitrant, material. In the last poem, “One By One”, he echoes his old master, Thom Gunn, when he dismisses a former lover by remarking that

How can we know the dancer from the dance? But Yeats’s appeal to unity of being is here maybe subverted by the assertion that such unity doesn’t so much attest to deep truth as abide in persistent depthlessness. On this reading, the poet becomes a master of that assurance the OED defines as the true meaning of aplomb. 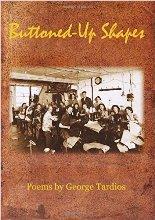 George Tardios’s Buttoned-Up Shapes has an untroubled, if never bland, relish for the earthly. A Greek-Cypriot by birth, Tardios uses his poems to record and often celebrate village and family life in a culture from which, though he now lives in London, still animates his memories. Photographs of local scenes and people, together with substantial explanatory end-notes, plump out the multi-dimensionality of Tardios’s collection. Like so much Greek art, like so much Greek experience, Buttoned-Up Shapes comes across as a blend of the comic, the tragic, and the fatalistic. If there are moments when Woods’ poems summon up the shade of Cavafy, Tardios’s work, in powerful comparison, is reminiscent of Kazantzakis, of the Cretan’s bare-chested, unflinching acceptance of all that happens to happen.

And yet the word “acceptance” is too passive, too genteel even, to do justice to the full-throated note that Tardios at his best, or most characteristic, habitually sounds. Reading his work you’re aware of how judicious, how risk-free, much Anglo-phone writing by comparison seems.

It isn’t fair, you want to mutter. We can’t listen to Aphrodite’s song. It isn’t ours to hear. Still, even Greek poets have to know how to address the history with which they’ve been as much burdened as blessed. Village life in particular can be oppressive and Tardios refuses to sentimentalise. Hence his notating the casual or anyway tolerated cruelty to animals; hence, too, his acknowledgement of how rejection inevitably comes to all who fall foul of convention, of rules they can do nothing to follow.

I doubt that any one of us born into Northern European cultures can ever fully comprehend the near-laconic fatalism of these unyielding, implacable lines.

It would, however, be quite wrong to give the impression that this collection is dominated by failure, let alone defeat. “And still the grass eternal springs.” John Clare’s great assertion speaks from and to a readiness to more than endure which, though most recognisable perhaps in the long, trampled-on history of peasantry, is discoverable elsewhere. Hence, Tardios’s long poem “Ioulia and Francos”, which celebrates, or anyway attests to, an indomitable persistence of two lovers against the rebuffs they have to endure. And another long poem, “So I’m Told”, perhaps the finest in the collection, is vivid with the particularities of lives remembered, the rhythmic fluency of its narration giving it a strength beyond the merely notational:

This, and other poems in Buttoned-Up Shapes, are, in their atmospheric density, reminiscent of the prose tales of the nineteenth-century master, Alexandros Papadiamantis, bringing onto the page the vivid quality of Greek island life, its rough, grainy texture, though Tardios, perhaps by virtue of writing in verse, knows better than did Papadiamantis where to let well alone, where to stop. Great stuff.