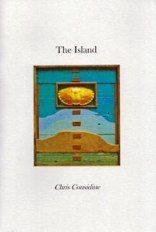 This is a short sequence of poems about Looe Island, off the coast of Cornwall, where the author (I assume) lives part-time. It has been inhabited by the Romans and others, but it’s ‘untouched by the decades’ and we know little of its history. It sometimes hosts a wedding or a family gathering, but you can never be sure of getting on or off it. Crossings are tough; ‘the islanders were marooned three weeks last winter’. People grow their own food and raise their own animals. A particularly striking poem, ‘Pig-sitting on the island’, is ambivalent about man’s treatment of other species:

‘It’s important to set out for the island’, we’re told in the opening lines of this book. It keeps reminding us of the sea’s vast power and people’s struggle to feed themselves – realities which most of us in the developed world prefer to forget. Chris Considine is an impressive poet and this sequence – like Christmas dinner in the poem of that name where the family splash through freezing surf to gather around a loaded, lighted table – is something to celebrate: