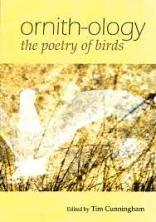 Our four-year-old grandson, being shown around the local aquarium, looked longingly at a brightly coloured specimen, pressed his nose against the glass and murmured ‘I’d really like to…. eat that fish’. On being met with astonished gasps and cautious laughter, he said earnestly: ‘No, it’s not difficult, Nanna, you just put it in the oven and wait.’

It is very hard now to write originally about birds too. I suspect we have to watch them work or sing or fight without apparently trying to make them appear remarkable. The way they do these things is remarkable enough, and they need no help or reinforcement, verbal or otherwise. In other words, if they look too obviously ‘cooked’ we’ll probably ask for the raw version. Tim Cunningham knows all this, of course, and his introduction to the work submitted by Poetry Wivenhoe and Mosaic (Colchester’s ‘Stanza’ group) together with beautiful illustrations by a handful of local artists, opens with the words, ‘Welcome to the bird festival’. He asserts that ‘everything has the stamp of first hand experience with minimum debt to the internet.’

As if to add emphasis to this last point, the festival opens with ‘An Absence of Birds’ by Rosie Sandler, revealing her intention to create some:

Appropriately, then, as if to begin with a chronological approach, Pam Job offers a brief study of a fossilized bird:

A celebration of the comparatively well-known tricks of a falcon following the lure ends with what might be the start (or end) of an entirely different poem:

There is a fine self-explanatory tragi-comic rant by Mike Harwood entitled ‘Duck Removed from Gresley Tribute Statue at Kings Cross’ lamenting said removal of the mallard as ‘undignified’ and apparently unfit to be an emblem for streamlined engines. Merlin, Osprey, Kingfisher and others are acceptable, but not ducks. The narrator lists other ‘trademark’ symbols of rich and famous, and dreams of ‘pro-duckers’ placing absurd duck-tributes at the foot of the sanitised statue. It’ll never work, I fear, but he and we have a lot of fun contemplating it.

Other witty flights of fancy present a pigeon cashing-in on a tube ride to the next stop, in rhymed quatrains by Stewart Francis, and an exotic affair (reported by Candyce Lange) between ‘The Nightjar and the Swift’, the former

A grim eco-drama by Sandy Goldbeck-Wood entitled ‘Puffin Wreck’, after listing all the possible causes for demise and rejecting each one, says

Despite being literally out of synch (‘someone‘?) she reaches a painful climax with the destruction of feeding-grounds described from the birds’ word-of-mouth point of view, mother to chick. In another poem there’s a nod in the direction of Wallace Stevens:

One is struck both by the visual and the visceral in a very readable and beautifully produced collection of thirty poems (by almost as many poets) and six illustrations. How to be original? Well, a good recipe surely includes a certain amount of transparent ease, letting the poem come as naturally as a bird to the garden or not at all, to coin a phrase. A wag on Twitter, responding to David Attenborough’s recent Ninja Glass Frog, wrote ‘I have seen a transparent frog kick a wasp in the face. My life is complete.’ If I were a wag, and able to use the internet, I might end with something like that.