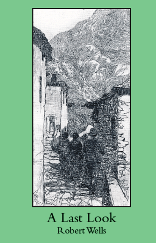 Graham Hardie finds that the poems of Robert Wells offer some pleasing insights.

A Last Look by Robert Wells is a competent chapbook of poems. Subjects include an imaginary collection of Greek coins, students on a skiing trip, the fable of a border collie on Exmoor and a reflective tribute to a deceased friend and her garden. The poems are clearly written and engage the reader on many levels, with a mixture of poetic styles; however, I did notice, on reading the collection a couple of times, that there seems to be no serious underlying theme to unite these poems . Nevertheless, the narrative and poetic voice is still strong.

“The Coin Cabinet ” is about a fictitious collection of Greek coins. As stated in the notes, the author has a genuine fondness for these artefacts and this is clearly evident in the poem. It is highly descriptive in its content and each coin is described in 12 lines, with a flowing rhyme and metre scheme. Lines like “An opening rose. A swan flourishing its wings./A prow. A tripod. A lyre with seven strings.” and “A dolphin-rider above a curling sea./ A girl, half-stripped, in the branches of a tree,” are among my favourites.

There are a couple of short poems in the collection which skilfully express the poet’s thoughts and intentions in a systematic and confident manner. One of these is “Loggerhead”:

The metaphor of the heart’s journey as being similar to that of the journey of a sea turtle, I find very evocative; and, in my opinion, this is what the author does best – a simple poem with a simple message.

“The Garden” is a poignant dedication, memory and tribute to the poet’s friend Brenda Dowson. The poem opens with the lines,

and the author’s affection for a lost friend is patently evident. In the next stanza, the author describes the deceased’s relationship with her garden. Lines like “It never took shape! / A few untended roses / and strangling oleanders” suggest that she might have “lived for the day / imagined, imaginary / when all would coalesce” in her garden. But when death was near, she “had no time” for it; and, after death, the garden fell into disrepair, “no trace now of the cherished / vision which kept you busy,” Nevertheless, something of her spirit remains within the garden in the form of “dark bamboos” which still grow there and which the poet describes as “your emblem”. I enjoyed “The Garden” for its lucid pathos and its affecting overtones of remembrance, as well as the imagery and poetic ideas.

“Winter classroom, L’Aquila” is a straightforward piece about the poet’s thoughts on his “truant pupils” who are “brown from skiing” and are “matter-of-factly unapologetic”. The author observes that “for them first things are happening / and still to happen / on the drifted blankness of the slopes,” where “the slopes” are surely a metaphor for life, as the pupils embark on the flagrancy and adventure of youth.

As previously mentioned, I believe the author achieves his full poetic potential in the shorter poems in this chapbook and another example of this is “The Smile”:

Again this simple use of form conveys a potent image and conveys the idea of a “smile” bringing gratitude “as to a spring”. On occasion some of the poet’s longer pieces tend to linger without any poetic direction like in “The Fall of Winston” and “In the Abruzzi”, but here one sees in a limited space the poetic voice expressed vividly and concisely.

The author says more in the shorter poems like “Exmoor February” with lines like, “In the yard-corner / a heap of carcasses, cleared / weekly by the Hunt,” But there is too much unnecessary elaboration and convoluted language in poems like “In the Abruzzi”, where the author describes being in a shop and encountering a man in front of him buying bananas. A mundane task becomes a philosophical question, as he writes about this scenario:

For me, this has hints of intellectual posturing and seems out of place in the general context of the poem and because of this, it adds little or nothing to the overall meaning of the piece.

In conclusion I would recommend reading this chapbook for its genuine moments of poetry where the voice, the meaning and the theme all come cross clearly. Poems like “The Garden”, “Loggerhead” and “The Smile” and the dexterous and entertaining poem “The Coin Cabinet” are all examples of this, as they are concise and clear and offer the reader a plesing insight into the poet’s mind.