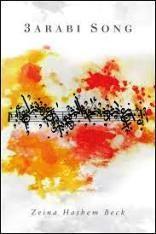 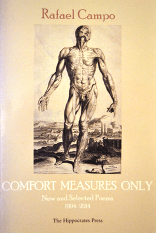 Rafael Campo is a much-published, award-winning poet and a physician. His clinical practice at Harvard serves mostly Latinos, the GLBT community, and people with HIV infection. He also teaches creative writing. Campo’s poetry addresses his medical experiences and his own gay life. His poetic metier employs traditional forms. As one critic described, “[Campo’s] poems are highly structured… he uses the security of form as a position from which to delve deep into the heart of his own feelings,” and those of his patients who are often poor and afflicted by racism and homophobia. Campo’s work in medicine and poetry illustrates 19th Century sociologist Rudolph Virchow’s aphorism, ‘Medicine is politics and social medicine is politics writ large.’ Campo’s given name, wonderfully, means, ‘God has healed.’

The title poem, ‘Comfort Measures Only’, echoes the physician’s injunction to “cure sometimes, relieve often, comfort always”. It is an example of Campo’s deft use of form, here the villanelle. The keys to an effective one are a refrain to alter in wording and meaning as the poem moves down the page, and for one stanza to bleed into the next. Campo manages this brilliantly. The opening stanza announces the refrain in the first and third lines:

The clinching four-line stanza is then,

In ‘Without My White Coat’, a pantoum, Campo masterfully shows the power of subtle alternations in the interwoven lines where each second and fourth line of a stanza become the first and third of the next. The poem begins by revealing the magical power of a healer’s costume: ‘My white coat holds my shape, stands for something / universal — love, healing, peace.’

The final stanza returns to the beginning, completing the weave, where the physician wants to identify with his patients but, like a curandero, is aware of the magic thus endowed:

In the adjacent poem, ‘Just Know Your Shit,’ a patient prefers skill over feeling:

Yet the physician mustn’t let objectivity turn into indifference. His instrument, a stethoscope, gives voice to the danger of ennui affecting him as he sees one patient after another (‘The Stethoscope Replies’): ‘I’ve heard this one so many times before: / the story of some awful heartbreak, or / the murmuring of love found at long last…. Inhale, exhale, I’ve heard it all before.’

It’s likely that as a physician I gain more immediacy from several of the poems — in particular the early one, ’Ten Patients, and Another’, which describes desperate cases coming to the A & E. More accessible is ‘Alternative Medicine’, where Campo presents ten patients on rounds in the HIV clinic (‘Leukopenia’, ‘Cardiomyopathy, IVDU’, etc.) But each one, every ten lines in seeming effortless iambic pentameter, also reveals the humanity of the patient who has the disease — not, as too often expressed on rounds, the disease having the patient.

Disease it is, ultimately. There is beauty in the body, but also horror. The physician understands this daily. In the poem ‘Primary Care’ the words express a double meaning: professionally, the initial intervention at a GP’s clinic, and, existentially, the dominant cause of grief, which is bodily decay. The poem goes from ‘Dressed in youth, you dazzle me / with your perfection, body.’ to ‘Body bleed, body stink, / remind us that we suffer, yes remind / us that we must, or else we never lived.’ Here, though it may not be the poet’s immediate intent, I am reminded of the pictures of taken after liberation of naked bodies shovelled into burial pits in concentration camps.

Campo’s poems provide a master-class in writing that combines the best of prosody with the profoundest of human feeling. 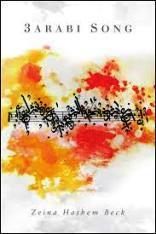 As Zeina Hashem Beck explains, 3arabi is the Arabizi way of writing “Arabic”. “Arabizi” comes from the combination of the words “Arabic” and “Englizi” (English); it uses numbers to represent sounds that are specifically Arabic, and has become well-known among Arabic speakers (especially online and in texting)’. The 3 here extends the vowel sound of ‘a’.

Beck comes from Lebanon, speaks popular Arabic, but writes poetry in English. She also performs her work, here with a backup Arabic chorus: bit.ly/3arabiChoir. Beck was selected by Carol Ann Duffy as a 2016 Laureate Choice for her pamphlet ‘There Was and How Much There Was’ (Smith/Doorstop, 2016). 3Arabi Song won the 2016 pamphlet competition sponsored by Rattle Magazine, a leading American poetry journal.

Again like Campo, she writes, unapologetically, ‘political poetry’ — the Arab experience in the 20th and 21st centuries in its emotional beauty and its turmoil. True to the pamphlet’s title, out of the seventeen poems, seven are apostrophes to famous Arab singers — from Egypt’’s Umm Kulthum to Lebanon’s Fairuz. Song and poetry are conjoined, long an Arab tradition. Copious notes provide historical information and translations of Arabic words.

Also like Campo, Beck writes mainly in traditional forms, ghazal, pantoum, a mirror poem. Here she is less deft. A mirror poem (‘Listen’), shaped like two hour glasses one on top of the other, tells of a bomb exploding near a mosque, and asks if the poet’s brother went to pray today. One difficulty, not of the Beck’s making, is that there was no room on the page for the whole second stanza, which then carries over to the next page, ruining the visual symmetry. But more problematic is that the mirrored lines have exactly the same content. Some variation subtly changing the meaning would have felt more accomplished.

Similarly, the ‘Pantoum for Sabbouha’ repeat lines are replicated almost exactly, and the final stanza doesn’t link back to the first.

The strongest poem in the pamphlet, ‘Umm Kulthum Speaks’ is also the most relaxed, unforced. It is worth reproducing its satisfying whole:

We look forward to more such poetry.

Does anybody know Benito Cereno? The Emma Press Anthology of the Sea