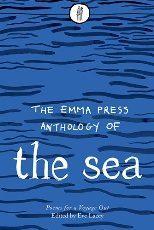 Emma Lee takes a dip in an anthology of sea poems

The sea can arouse images ranging from calm walks along the shore beachcombing for treasures, a lifeline to fishermen (both on shore and from boats), the surge and heft of a brewing storm to a broiling stealer of lives and all the moods in between. It can be a mirror, a keeper of reflections and a chance for self-discovery. The Emma Press Anthology of the Sea groups its poems into four sections, ‘Ashore’, ‘Adrift’, ‘Awash’ and ‘Avast’, taking in coastlines, the deep seas, washed up whales and mention of the inevitable albatross. Gathering the poems by theme prevents the reader from feeling like the two year old in Yvonne Baker’s “Distance” yelling “It’s too big.” The sea’s deceptiveness is explored in Sarah Howe’s “Coast of Bohemia”

The poem also mentions the way waves wash away footprints and change perception of the landscape so defying human attempts to control it – a topic also touched on in Claire Trevien’s “La Vieille” where the bone gatherer laments,

Brian Grant’s “Now all of us are closer to the sea” brings readers up to date with climate change,

The menace in ‘crawling’ ‘graven’ and ‘closer’ is echoed in the long vowels of ‘seep’ and ‘deep’ purposefully underlining the real danger of coastal erosion.

Most of the poems in The Emma Press Anthology of the Sea feel timeless but not old fashioned. Those using traditional forms avoid archaisms and still seem contemporary and relevant. There are no bloated carcasses and no sense of being cast adrift in a rudderless dinghy with tired scenery and the tedious tang of stale salt. Despite the familiarity of the theme, these poems are fresh and alive in imagery and craft. Each poem is like a boat that invites the reader to trust the machinery and take in as much or as little of the view as they desire.

.
Emma Lee‘s most recent publication is Ghosts in the Desert (IDP, 2015) and she was co-editor for Over Land Over Sea: poems for those seeking refuge (Five Leaves, 2015) and Welcome to Leicester (Dahlia Publishing, 2016). She blogs at http://emmalee1.wordpress.com.