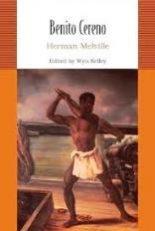 Sarah Lawson  plaintively asks the question: Why Don’t People Read Benito Cereno When I Tell Them To? 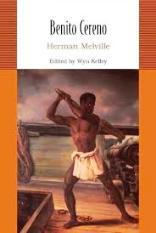 I have spent untold fruitless hours trying to persuade friends and acquaintances to read the novella Benito Cereno by Herman Melville, but do they ever do it? Do they heck! I want them to read so that I can allude to it as a shorthand term, but how can I allude to it if no one knows what I am talking about? Benito Cereno isn’t obscure by any means. Plenty of people have read ‘Bartleby the Scrivener’ and Billy Budd and other non-Moby-Dick products of the Melville pen. Benito Cereno, written in 1855, should be a household phrase summing up a certain tricky situation.

In Melville’s story, set in 1799, Captain Amasa Delano is a sea captain from Massachusetts, a likeable, helpful fellow, who finds another ship seemingly in distress off the coast of Chile. It is near the entrance of a harbour but flying no flag and being steered erratically. He goes aboard to see if he can be of any assistance.

The scene he finds is described in some detail. The crew, such as it is, seems to be a mix of white Spaniards and black Africans. Delano is told that the ship has been through several disasters one after the other: gales and storms off Cape Horn, then disease and calm waters; they have run low on food and water and are generally in pretty bad shape. Most of the crew, a great many of them Africans, and all the passengers succumbed to scurvy followed by a contagious fever. The captain, Benito Cereno, seems to be unwell but fortunately has a faithful black servant at his side. The blacks were owned by Alexandro Aranda, a Spanish gentleman and close friend of Cereno’s who died of the fever. The slaves are docile and not locked up or in chains; groups of them pick oakum or polish rusty hatchets. Everyone is working busily at assigned tasks.

Captain Delano comes on board early in the morning and spends all day in the company of the Spanish captain. Benito Cereno is a strange fish. He seems polite, but at other times downright rude and distracted. There are numerous odd things about the ship. It is very shabby and not flying a flag. Its sails are tattered, the figurehead is covered up, there are barnacles on the hull and some sort of seaweed festooning the ropes. Well, but they have been through all those vicissitudes, so that must explain at least part of it. Cereno appears to be haughty and inattentive; he doesn’t say very much, except to explain the recent troubles. He coughs and has to be supported by his faithful retainer, Babo. Discipline on the ship seems lax at times and harsh at other times.

Delano sends back to his own ship for supplies of food and water to give the stricken Spanish ship. Even if the foreign captain is an oddball, Delano wants to do the decent thing. Although naturally generous and good hearted, Captain Delano sometimes entertains dark suspicions about Benito Cereno. What exactly is going on here? Cereno and his rag-tag crew, including women, aren’t pirates, but now and then Delano wonders if he is in some danger on board this strange ship captained by the peculiar Spaniard. He no sooner forms a suspicion than he feels foolish for being so susceptible to fantasy. But very early on we have learned that Captain Delano is ‘a person of a singularly undistrustful good nature’. The narrator slyly adds: ‘Whether, in view of what humanity is capable, such a trait implies, along with a benevolent heart, more than ordinary quickness and accuracy of intellectual perception, may be left to the wise to determine.’

As Delano is finally leaving the ship in the evening, Cereno first rudely disappears but then comes to see Delano off the ship and safely onto the ‘whaler’ or tender, to return to his own ship. At the last minute, just as the boat is pulling away, Cereno throws himself into it. He soon explains that there has been a terrifying mutiny and the considerate manservant who never left his side is the leader of the gang. Cereno would have been killed if he had put a foot wrong. Everything Captain Delano saw was an act to deceive him.

Delano sends his mate and a company of men to board the Spanish ship. After some hand-to-hand fighting they take control of it, and the ship and the mutineers are eventually delivered to the authorities in the destination port in Peru. The full story comes out in depositions before a judge, and it is even more sinister than Delano’s worst suspicions. Delano, though shrewd in a general way, has too sunny a disposition to surmise the truth behind the charade. In fact, the rebelling slaves brutally killed off the crew and passengers, and the covered figurehead is actually the skeleton of Aranda, the slave owner and Benito Cereno’s dear friend. Captain Delano, as an American innocent encountering foreign deceit, is a Henry James character before his time.

I lived in the People’s Republic of China for a year in the early 1990s not long after the Tiananmen Square massacre and in easy memory of the Cultural Revolution. I longed to tell friends back home that my experiences sometimes had a certain Benito Cereno quality, but nobody seemed inclined to interrupt a busy life to read 109 pages for me.

In truth, anyone visiting a dictatorship or a dysfunctional family or a cabal of co-workers (or a pre-school play group, for that matter) could benefit from having read Benito Cereno. Anyone suspecting that there is more to the scene than meets the eye would have a handy analogy in Melville’s story. If I had my way, the kindly, unsuspecting American sea captain would enter the language as an archetype: the well-meaning person who fails to notice skulduggery and tries to put a positive construction on an ambiguous situation. Amasa Delano is a distant cousin under the skin of Pollyanna. She entered the language, so why not he or the unfortunate Benito Cereno?