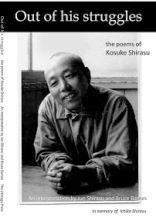 This volume, a bi-lingual edition of the poems of Japanese political activist Kosuke Shirasu, is described on the cover as ‘an interpretation by Jun Shirasu and Bruce Barnes’. Jun is Kosuke’s grandson. The book offers a window onto a period of Japanese history, the 1920s and 30s, which some Westerners may not be fully aware of. Some my, of course, be at least partially acquainted with the post-Meiji Restoration period from say, 1868 onwards, through books and films, when Japan underwent a rapid transformation from a mediaeval, feudal society to a modernising industrial economy. Media productions such as 47 Ronin, (although set in the 18th century), or Memoirs of a Geisha, set in the period when Shirasu was active, while deeply problematic in some respects, give at least a partial view of aspects of this process.

As in other societies undergoing such change, elements of feudalism, such as young women being in effect, sold to employers, were still in play in the 1920s, while trade union and labour struggles were widespread in Japan. It is with this struggle, as the book’s title indicates, that Shirasu’s poems are concerned. Many were printed in newspapers and other periodicals, and his nephew is to be commended for his archival work in retrieving these texts. The book features English versions on the verso pages, and the Japanese originals on the recto pages. Anyone fluent in Japanese can therefore form their own opinion of both originals and versions, and how successful the collaboration between Brice Barnes and Jun Shirasu has been. Barnes is an experienced and well published poet, with, I believe, a working knowledge of at least one other language, and therefore well aware how problematic is the task of producing translations or versions.

As far as I know, Shirasu is not well represented or possibly even featured in anthologies of 20th century Japanese poetry; but then neither is his contemporary Kenji Miyazawa, known to some of us through Gary Snyder’s translations featured in his book, The Back Country. Miyazawa (1896 – 1933) was a schoolteacher in northern Japan, whose work features a mix of scientific and Buddhist references, thus exemplifying the collision or collusion of tradition and modernity in Japan at that time. ‘Distant Labor’ alludes to the realities of rural life

while ‘The Politicians’ shows an attitude to politicians which takes a longer view that shows his fusion of Buddhism and science, where they are ‘stirring up and bothering people’. The poem’s third stanza concludes

Shirasu’s poems are more closely focussed on the ongoing political struggle to improve conditions for Japanese workers, and therefore Buddhist allusions, at least to this reader, are not immediately obvious. The English versions of what are occasional poems in the proper sense, employ an apparently plain language which might owe something to Brecht in translation, or to the contemporary work of Jim Burns, whose poems exhibit similar concerns to those of Shirasu. Another reference point for English readers might be Sally Flood, or other poets associated with the Federation of Worker Writers or its successor organisation, the FED. Anyone looking for a contemporary version of Mayakovsky or Adrian Mitchell, should look elsewhere.

Japan’s imperialist adventures in Manchuria during the 1930s inform several of the poems here, as in ‘Letter from Manchuria’ where stanza 2 reads

The poem concludes ‘The decorated soldier is to my mind a bare human being.’

This seems a long way from the traditional Samurai values, and shows the same sort of ‘modern’ warfare we are familiar with from accounts of World War 1. Conscription into Japan’s armed forces, and the concomitant ill-treatment of conscripts and recruits is the subject of ‘Let’s return to our village’, where stanza 2 reads

‘War left nothing’ is written in the voice of a girl whose father died in these adventures, and whose mother struggles to exist on an inadequate pension; while ‘Three sisters’ gives us a portrait of working life for many Japanese women,

There are obvious echoes here of Thomas Hood’s ‘Song of the Shirt’ with its refrain ‘Stitch! Stitch! Stitch! / in poverty, hunger and dirt’: some things take far to long to change.

Like Brecht and Jim Burns, Shirasu’s concern is to help the reader understand what is going on in contemporary Japan, and exactly what is at stake here, especially as some poems note, political repression and police brutality was endemic and systematic. The Auden who felt obliged to deal with the ‘boring meeting’ and the ‘ephemeral pamphlet’, for all the sterling qualities of his 30s writings, is a stranger here. Meetings, strikes, police roundups, are all dealt with in the poems Shirasu published in ‘Battle Flag‘and publications of the Japan Proletariat Workers Alliance. According to Bruce Barnes’ Introduction, the leaders the Party renounced communism in 1933, and he goes on to say that Shirasu and his family suffered Secret Police harassment, and moved house several times.

It is not clear whether Shirasu wrote more poems during this period, or if he wrote anything between 1933 and 1943, but I doubt, if (like Auden or the speaker in Burns’ poem ‘ Confessions of an Old Believer’) he renounced his political views; perhaps some eager Japanese post-graduate student, or someone with access to Japanese archives and library facilities, would care to take this further. Bruce Barnes and Jun Shirasu are to be commended for bringing this work to our attention, andreducing our ignorance of this period of Japanese culture and history.