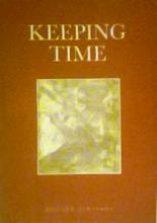 Keeping Time is Donald Atkinson’s first collection to appear in a dozen or so years; and this longish silence comes after a prolific period between 1988 and 2004 during which he won several major poetry prizes and had five collections published by Peterloo and Arc. I cannot speculate on reasons for this substantial gap in publication; but I can say that the book is a welcome addition to Atkinson’s body of work.

The opening poems establish at once three recurring themes: close observation of the experience of loss and absence; the enigma of Time – or at least our perception of it; and a fascination with what might have been. Thus ‘Aubade 1’ offers the beautifully economical recognition Each time she left /… he would wear out a day / in the aftermath / of her presence. In ‘Aubade 2’, a robin flies indoors to perch on a chair back and maintains a mutual watchfulness with the poet for a long, taut moment, / sideways on…/ till Time gave up and the bird flew off.  ‘Aubade 3’ concerns a poignant dream occurring one morning during a snatched extra few minutes in bed and the subsequent reflection on the fragility of precious experiences:

Atkinson’s use of ‘he’ in these poems is interesting because the close identification with the central character’s intimate thoughts and feelings would not have been inconsistent with a first person narrator.  But use of the third person produces a very effective sense of sympathetic detachment from moments of significant private emotion. Similar detachment occurs in ‘I Claudius?’ with its complex re-examination of an occasion when he had, / by his own admission, let himself down / (and yes, it goes without saying, someone else too). The same ‘he’ sometimes crops up among the short haiku (or haiku-like pieces) which are scattered through the collection offering pithy life-lessons:

When revisiting the past, Atkinson does not dwell only on the bitter-sweet memories of absence. ‘Picture not for exhibition’ deals with the pain of persistence – the unwanted image that will not be erased. And ‘Hard to be sure’ meditates on the way images and conjectures can emerge unbidden from nowhere during contemplation of an artwork: are we talking only half story here / or more than one?

Vividly as this is re-imagined, however, the poet, elsewhere, can only wonder, on seeing the steady gaze of an attentive child, must he himself / have once looked out like that? And with regret he has to ask what would it take / for him to feel the same certainty now? The gap between the ‘then’ of childhood and the ‘now’ of old age is neatly bridged in the poem ‘Awaiting hip-replacement’ which recalls a stern parental injunction to stop skipping and walk properly and notes wryly that simply to put one foot in front of the other is now all that the limping narrator can manage to do – and so he has achieved belated obedience by default!

Atkinson is a close observer of the human body in moments of stillness; and he manages both to aspire to meticulous accuracy and also to be honest about the limitations of verbal description. In ‘Holiday thoughts from abroad’ we have the beautiful image of

And yet, a few pages further on, ‘Untitled’ seeks for words to respond to the sight of her hand on the window sill, / in the warm light but finds that lifetimes of kiss-chase with metaphor / came nowhere near. Even the sunlight turns out to be

The poet is eloquent about not being able to find the right words!

Elusive might-have-beens crop up again in ‘The best mother-of-god we never had’ in which the angel Gabriel visits the wrong mother-to-be (I am guessing it to be the mother of John the Baptist). Similarly, a delightful Christmas carol ‘for sensible children’ tells of the Three Wise Men calling in error at the house next door to the one where the traditional story requires them to go. We are also given a warning of what still-might-be in ‘Rehabilitation’, an elegant sestina about a shining boy forced by circumstances to sell things door-to-door because

When not observing human behaviour, Atkinson turns his attention to the natural world – sometimes bringing more startling imagery to bear than might be expected in pastoral verse. Walking in the Pyrenees he comes upon a suicide of crocuses / keeled-over on their anorexic stems / like worked-out ballerinas. More wonderfully extravagant still, he imagines ‘A Gethsemane’ where lilies blare out / their one red note of assassination and heraldic stamens round the pistil / doff their orange caps.  Atkinson’s poems seldom waste words – rather they can make a  few words do a surprising amount.

As the book draws towards its end, Atkinson reflects his concern with the passage of time by offering Crépuscule 1 & 2 to match the Aubades with which he began. These revisit the theme of growing old that is present throughout the poems; but the tone is gently upbeat rather than mournful. Charmingly, the memory of all the love he had received

This finely crafted collection of warm and humane poems is not, however, content to end with a wise and positive contemplation of aging. Instead, the astonishing last poem ‘Poplars in Sarajevo, 1993’ is outward-looking and compassionate as it borrows from a Biblical story of a blind man’s healing as told in Mark 8:24. It begins

It would be worth getting hold of this book just to discover the six remaining lines of this remarkable poem – but of course there is far more to this collection than that.

London Grip Poetry Review – Faber Letter from North Manchuria – Out of his Struggles: the poems of Kosuke Shirasu