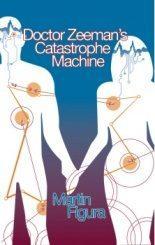 None of us wants to be defined by a single incident from the past, but readers of Martin Figura’s work will know that when he was nine years old, his father killed his mother. Figura’s collection Whistle (Arrowhead Press, 2010) – dedicated ‘In Memoriam’ to his mother, and to his present wife, poet Helen Ivory – is a masterpiece of oblique understatement laden with powerful emotions. Many of the poems have the simplicity of an ink sketch, complete in their brevity, and the collection honours many facets of the family’s loss.

Figura likes a good laugh too and is known to be a hilarious performance poet. Whistle became a highly acclaimed show and this present collection is having the same treatment, with its performance at the Camden Roundhouse reviewed here https://www.youtube.com/watch?v=dMLWKFdG2Xw in London Grip.

Despite the dramatic title, Doctor Zeeman’s Catastrophe Machine leads us into more commonplace family territory this time: divorce. Sir Erik Christopher Zeeman (1925 – 2016) will be known to mathematicians as the man behind Catastrophe Theory, a branch of singularity theory that defines how tiny alterations in circumstances can lead to minute changes in behaviour that together can culminate in fracturing the entire status quo. Zeeman was thinking mathematically; Figura uses the theory to shine light, without shadows of guilt or blame, on the end of his first marriage. In the title poem, he imagines Doctor Zeeman explaining his theory to the warring couple with the help of a Catastrophe Machine which presumably features, elastic bands and all, in the collection’s show. Here is the whole poem:

This is essential Figura, askance yet precise, keeping us unsure whether he is joking or heart-broken.

The collection leads us in with ‘Rooks’, a nature poem, beautiful in its sense of place and time:

It was the second reading that brought it for me into the arid emotional land of marital disintegration.

Whistle works so well because of its single subject matter: June Figura’s demise in 1966 and its long aftermath. Doctor Zeeman is broader in scope, taking in for example an elegy to Liverpool, Figura’s birthplace, called ‘Paradise Street’. Its eight parts range from fire-watching in the Blitz in 1941 – ‘The Mersey is a hungry mouth, her dark city night / torn down by bombers, her fearful people / in cellars’ – through recovery in the 1950s and ‘60s, the years of Thatcher and being European City of Culture (2008) to a recent visit by Michael Heseltine – ‘Tarzan returns, silver maned in a long / camel coat’ – always with nineteenth century square-riggers heaving and bobbing at the quays.

Domestic violence keeps breaking through, though it is not always clear whose:

This home violence reprise builds so that by the time we reach ‘Camera’, Figura’s economy is deadly:

In 1972 Figura joined the Royal Army Pay Corps aged 15, as people looking for family security often do, and rose over the following 25 years to the rank of Major. In the midst of this varied collection, almost hidden, his poem ‘The Machine Gun’ (after Stephen Graham’s memoir ‘A Private in the Guards’, 1919) describes how a machine gun is ‘designed to … reduce a man / tangled in the wire to rags’ and

The brain needs to cool between of bursts of these words; I found myself wondering if here is this collection’s core where the poet’s meditations on his military experience and family history come together in a sense that perhaps he and his family, all of them including his father, are victims of the twentieth century’s many layers of violence, with this gun, this military catastrophe machine as the symbol.

In Stag’s Leap (2012) Sharon Olds invites us to share every painful breath of her divorce. Figura is more reticent and at the same time deeper, combining playfulness with a fearless generosity that makes this an enriching, unforgettable read. I look forward to the show.

Rosie Johnston‘s three poetry pamphlets are published by Lapwing Publications (Belfast), the latest Bittersweet Seventeens in March 2014. Her poems have appeared in various magazines and in April 2016 she was commissioned to take part in Live Canon’s ‘154 Project’ celebrating Shakespeare’s 400th anniversary. She has been poet in residence for the Cambridgeshire Wildlife Trust since 2014. www.rosie-johnston.com

Letter from North Manchuria – Out of his Struggles: the poems of Kosuke Shirasu Does anybody know Benito Cereno?