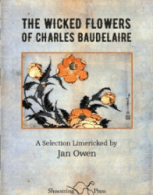 Jan Owen is a serious writer who has already translated Baudelaire’s Selected Poems (Arc Publications, 2015). It is important to say this, because she says herself that her little book is a ‘descent from the sublime to the ridiculous’. It comprises eighty-seven limericks, loosely related to poems from Les Fleurs du Mal, and we all know that it’s almost impossible for a limerick to sound serious. This Baudelaire is not the tormented soul that his biographer Enid Starkie insists he was but a total hedonist, forever drunk or falling in and out of bed. Which means that a great part – perhaps the most important part – of his poetry is lost in translation.

For instance, the famous poem ‘L’Albatros’ says that a poet, like the bird, is a monarch in his own realm but in ordinary life inept and helpless:

This is how Jan Owen renders it:

No place here for the tragedy and the vulnerability. Likewise, ‘ Un Voyage a Cythere’ is a deeply disturbing picture of the ‘island of love’, a beautiful place where a corpse is swinging from a gallows and being savaged by birds. This version turns the horror into humour:

So, read this book for laughs. I did laugh quite a lot and Jan Owen has sent me back to reading Baudelaire. I can’t find a French original for her ‘To the Chief Censor’, but it is still highly relevant and a perfect limerick in English: