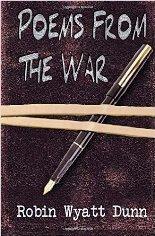 Robin Wyatt Dunn is anything but a simple poet. I have followed most of his poems and progress over time and I consider that his writing reveals a poet of intricate complexity. I think it would be impossible to attach a specific label to him or to try to frame his poems in a specific literary current. Dunn is a versatile poet who easily dons different authorial masks for each occasion and thus treats a variety of themes without the pitfall of repetition and personal cliché.

His poems, and specifically those in his book Poems from the War, reveal a poet of a rebellious nature, as well as Dunn’s frustrations when confronted with inequality, which is a constant in the contemporary world, and in his poems. They also reveal his impatience with the present capitalist society. The often short, poignant poems bear a striking resemblance to Victor Hugo’s Paris incendié, written over a century and a half ago. I think that Dunn tries to raise awareness through most of his verses, to make the ordinary person open their eyes and shout out: “This is enough! It needs to stop! Now” and the poems gathered under this title fall in that category. The second half of the book, however, treats two other preponderant themes: love and the loss of innocence.

The poems are not titled and I strongly believe that any titles would have taken away from their intensity. Geographically speaking, the action takes place in California, in the Berkeley area – which is significant since Berkeley is the oldest Californian University, and Dunn actually seems to have written a manifesto against old structures. The tone alternates: aggressiveness is followed by melancholy and regret, which speaks to the poet’s ambivalence. He wants change but not the violence usually associated with it, which is starkly ironic given the title of the collection, evoking the violence of a battlefield and alienation. There is no uniform structure to the poems throughout the book. Long verses or stanzas are followed by one-verse poems, which only contributes to the impact of words that vary from strong and brutal to sweet and calm.

The first poem opens the book in force. The two first verses sound like the cannon fire announcing the beginning of war:

Dunn reduces people to newspaper scraps in fine ash swirled / into the air. The ordinary people’s nothingness in the eyes of the system gives the poet the opening needed to sound his battle cry:

Dunn might stand for fighting oppression; however, at the same time he is able to see where violence and real war can lead:

Perhaps this is the reason for staging a fantasy war – on one hand, he longs for final and definite action, which would bring an end to what he loathes deeply; but, deep down, he also fears the consequences. His disillusionment and creed are both revealed:

Nonetheless, I find interesting the contradiction between his call to fight and his awareness that the fight is futile:

The entire book depicts a deeply set conflict between the poet’s rebellion and beliefs, the political aspect of the matter and his own humanity. The Trump mask he mentions below is the quintessence of the raging battle within himself: he wants to stand up for his beliefs but he’s afraid, at the same time, that he would only mimic the external conflict and fall into something much worse:

He is also aware of what can be found as the basis of the people’s evolution: I realize this is how barbarians feel, on finally entering Rome. Innocence is killed in a war and Dunn exposes this aspect in a poignant manner, showing the orphaned child whose parents they kill.

At the same time, he also realizes that his own innocence was smothered and replaced by brutality and he’s hoping to take some of that innocence back

War is brutal and absurd and lives are lost, dreams are crushed. In any war, along the history of humankind, people have had to remind themselves that there was a reason to fight or the nonsense would have been overwhelming. Dunn seems to feel the same, in part, because the theme of love also appears later in the book. However, the love he envisions is not sweet and doesn’t bring forgiveness; it doesn’t make him forget what is going on around him. He even mentions the possibility that the world could end. He creates a ruthless comparison between the surrounding conditions and the evolution of his love story that will end:

The poet loves to play with words to confer more power to the image, as in:

“red hand” – the blood on his hands, “glad mind” – the euphoria of being in the middle of what he wanted, these seem to clash but the punch is stronger because of that.

I have the feeling that Dunn loves irony masked under nothing but irony. For instance, he writes:

His irony is not meant to make you smile but to make you think and remember. How many villages have been burnt to save them? How many structures have fallen under the guise of strengthening them? His irony is also intertwined with regret and desolation with the realization that all efforts and losses and all the blood were futile:

In retrospect, he offers his strange and contradictory advice:

The end of the book is as strong as the beginning. In the last few verses, Dunn concludes with what is left in the ashes of a revolution.

I take this book to be a strong manifesto. It is full of symbolism: the location, Berkeley; the orphaned child; the presence of Peter Pan and Wendy, to name just a few. I particularly enjoyed the manner in which the poet used repetition to drive a specific idea home. It provoked confusion and regret, not only determination, and thirst for revenge. However, the way he showed the evolution of love during the war and how he hinted at the loss of innocence and humanity saddened me. The reference to falling through the hole into Wonderland, as well as the mention of his lover’s death touched me and made me think.