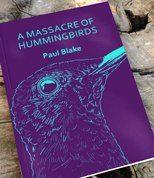 Paul Blake’s chapbook is alive with talent and promise – a thoroughly enjoyable debut. It needed a firmer editorial hand in places, but despite some blemishes – easily correctable in future collections – this is a poet from whom we will, I forecast, hear much.

Blake, who works as a medical writer in London, is for the most part unabashedly lyrical, prepared to stick his artistic neck out in the face of possible criticism, even mild ridicule, from those who will countenance nothing but the strictest focus on quotidian realities. His work has a constantly questioning and exploring quality as he scans both the heavens and more metaphorical firmaments for the meaning of life, his own at least. In ‘Winter Stars’, the oxymoronic oppositions are a little too stark, as in your iron heart / freezing me in place and the lines immediately following – In this clammy warmth / that chokes the throat of December – but the poem’s opening has a splendid fusion of grandeur and intimacy:

However, should the reader begin to worry lest the grandeur become delusional, the ending sets the record straight, with just the right kind of bathos (here almost Miltonic):

An Icarus of verse, Blake is prepared to fall (and sometimes does), as long as he gets the chance to soar first. He relishes language in all its potentially dangerous glory – and even includes a deliciously playful poem dedicated to the schwa, that commonest of English vowel sounds heard in the first syllables of words such as ‘about’ – which is perhaps why he refers to it as a silvery disease in ‘Lex(is)’. That poem wittily echoes and re-words a famous self-declaredly unsuccessful attempt at wording, the way of putting it – not very satisfactory of ‘Four Quartets’:

‘Still’ could allude not only to the perennial elusiveness of satisfactory phrasing, but also to the time elapsed between Eliot’s words and his own, pointing up the importance of poetic or at least thematic continuity. Poets should wrestle with the big questions that have always intrigued and troubled their most illustrious predecessors. I especially liked Blake’s description of language as our inheritance, the taint / we can never scrub from our blood, where ‘scrub’ conveys both a Lady-Macbethian abortive cleaning, and an equally vain attempt to expunge (as in the phrase ‘scrub that idea’).

‘Lex(is)’ asks, still in the context of language, Where else will you put your faith – / in the body, a known traitor? That striking final phrase flags up a key concern of the book, the extent to which the human body can be trusted and should be valued. ‘The body is an ingrate, it does not rejoice’ portrays its subject as an ultimately doomed tyrant, in a fierce, failed state which encourages a similar, dog-eat-dog self-centredness from other elements of a person (presumably mind, consciousness, etc) – Let us take from it what we wish and cast / it down, because it is greedy and evil. The end is hauntingly and memorably portentous:

However, another poem on this theme is not up to the same standard and in my view should have been excluded from the collection. ‘That the body allows its passenger limited access’ takes the lyricism to a point beyond courage, into the realms of recklessness. Ironically enough, it seems the poetic influence least suited to bringing out his talent effectively is that of his own namesake William, who one can make out lurking behind lines such as these:

‘Manifold’ is a word that’s always worth avoiding, and if ‘ravishingly’ is trite enough we hear in the next stanza that the sun rings out like a bell, while later phrases, such as the hijab of the flesh and the apple crispness of frost simply do not come off, and towards the end Blake turns his perhaps unconscious cap-doffing to a less than ‘Windhover’-like take on Hopkins in alliterative mode: And for this, gratitude, that we go through the glory of things almost insensible.  Generally, the book contains far too many metaphors and images relying on nouns joined by the word ‘of’ and if Blake does a CNTRL + F job on that humble preposition he will see the evidence.

The book’s standout poem, an absolute stunner, is a formal, traditionally rhymed sonnet where Blake’s elegance and propensity to risk the charge of over-writing are perfectly suited to the topic, an unctuously urbane calligraphy teacher who morphs into a would-be seducer. The eponymous anti-hero of ‘The Writing Master’ is teaching a wealthy married pupil, whom he calls ‘madonna’, to form better m’s. Blake’s sestet is a mini-masterpiece of controlled insinuation in which the main influences would now appear to be Shakespeare in style and format, and Browning in tone and attitude:

Clearly a tour de force like this cannot serve as a blueprint for everything the poet will go on to produce, so let us conclude with the impressively compact eight-liner containing the chapbook’s title, where Blake shows he can modulate his voice into more laconic and muted tones. ‘Fall’ pays awestruck respect to the destructive power of nature in the form of a strong wind out of the unforgiving north, creating a landscape where stubborn blossoms of the old fuchsia / have fallen at last and we are left with an image of slaughtered innocence:

Malika Booker is quoted on the back cover calling this a ‘remarkably addictive collection’, and after several readings I can second that. I’m confident that Blake’s follow-up will build on his many strengths, while eliminating the occasional flaws.