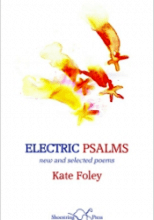 First of all, a confession – I’m ashamed to say I’d not read a Kate Foley poem before getting this book for review, but I’m very glad to have had this opportunity to become acquainted with her work, which I’ll certainly look out for in the future. The main reason for my interest in this book is that Foley, since her retirement in the nineties has lived a bi-cultural existence between Suffolk and Amsterdam. Having recently moved to Ghent, Belgium myself, I am keen to read the work of expat UK writers (such as Foley, Donald Gardner, Marcus Cumberlege and so on) who live in a Dutch or Flemish milieu. I was repeatedly pleased to see the poems include Dutch words I recognised or parts of Amsterdam that are familiar to me. The poem ‘Zin’ is a witty but profound meditation on a Dutch word that does not have an immediate equal in the English language. Foley suggests ‘appetite’ but knows it is more than that – a yearning and a hunger at the same time – a quality that is evident in all of her poems. As to the glimpses of Amsterdam that I recognise – just the other week on the tram there I saw placards around the elm-trees lining the streets urging the council not to cut them down. In the poem ‘Elmtrees, Amsterdam’ we come across a similar plea:

More than that, Amsterdam gives Foley’s work an extra dimension, a novel backdrop of greater liberality. It is celebrated in ‘One for the Memory Palace’ as a place where grown men / ride battered pink bikes, hung with plastic flowers and where a child growing up might be in with a chance.

With a little over 160 pages of poems, Electric Psalms includes selections from all of Foley’s previous collections as well as a generous sheaf of new, uncollected poems towards the end of the book. This layout allows us to see the development of Foley’s poetry: not so much a radical change in style – on the evidence of this book, her poems seem to have always been solidly crafted – but a cementation of her work over the years and a slight change in outlook and approach, if not a mellowing. The earliest poems here, from 1994’s Soft Engineering are more intellectually spiky and restless compared to the recent ones in later pages. In her earlier work there seems to be a fascinating drive to destabilise domestic familiarity which gives rise to some startling imagery such as the killing edges of furniture in a house where a couple are arguing in ‘After the Visitors’; or where love is finger-printed with distance in ‘Enclosures’. Conversely, when a poem takes the reader far out of a domestic setting, Foley makes the horrific and unspeakable (such as the Holocaust) seem domestic, as in ‘A Visit to the Camp Museum’ where we are shown a lamp / with yellowing skin shade / somebody still / dusts it every day.

The effect of having such things turned on their heads, or turned inside out makes for striking and memorable poetry in this case. What I like most is the journey the book takes us on – how in older age Foley must reconcile herself to the domestic and the mundane she has tried to elevate in her poetry. She never idealises or euphemises things, and this makes her love poems winning and believable, as in ‘Sleeping Together’:

I find the honesty and the refusal to euphemise in the excerpt above very moving, or in the poem ‘I Begin to Understand the Shape of Your Language’ where language curls up asleep in your mouth. / Did you know you snore in Dutch? Many of these poems are concerned with the movement of bodies through space / life, or an awareness of being confined. We see this in poems like ‘In the Frame’ where the gaze of a poet must be physically and domestically confined while at the same time it wants to venture far beyond the window frame. The most powerful meditation on space, freedom and confinement comes in the sequence ‘Fox Assisted Cure’ where a partially domesticated fox forms a kinship with a wheel-chair bound girl who is struggling to recover from a mystery illness – both are trapped in some way. The sequence ends with the fox returning to the wild: His what-next not for us to know. / His thanks was running. Foxes reappear in a number of Foley’s poems in incongruous domestic settings and seem to represent how irreconcilable human life is with wildlife, despite the repeated collision of the two.

There are numerous compelling strands underlying these poems, and I don’t have the space to talk about them all here. I‘ll simply settle on two more which strike me as the most salient. Many of these poems seem to explore what Dorothy Porter (writing in the 1980s about Scottish women poets) has termed the ‘subterranean stream’ of women’s narratives and try to draw attention to these neglected stories. In ‘Graveyard Politics’ a dead woman gets the last laugh by being buried on top of her husband, whose name on the gravestone is already obscured with lichen – Nature is on her side. In ‘Emily Dickinson: Dissident’ we hear how poetry allowed Dickinson to speak truth so wounding / clears its own space: makes free. ‘Three Women Smile’ is prompted by a line from Chekov’s Platonov that … the world grows its heart from your ugliness and three women share a non-lingual moment of humour and happiness across physical and cultural space: I smile again. / I may not be growing heart / but for now I have found my face. The second and final notable strand is one of the last elements of the book, where Foley begins to talk about her life being turned over to poetry and how she has found that poetry gives her direction, purpose and passion, that the key is to being like the fearless cyclists of Amsterdam in ‘Electric Psalsm’ – to just go for things, to take the risk:

This later brio is by no means lightly won, pat or facile. To read the collection cover to cover is to see how much Foley has been through to come to this new viewpoint of enjoyment of life and art. To return to the idea of the hidden narratives of women, in the poem ‘A Capital H’ – the closing poem of the volume – we are told that History is Kings – / less often Queens but that Foley is only interested in the non-patriarchal lower-case history of the individual, where the seeds of story and poetry are stored: