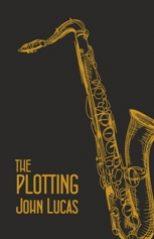 Thomas Ovans gets to grips with an intriguing novel by John Lucas which deals with a small-town jazz musician’s rather complicated love life.

Geoff Cousins, the principal character in The Plotting (I am not sure I want to say ‘hero’), spends much of the book trying to make sense of his relationships with two women. One is the fragrant and enigmatic Helen, for whom he has vainly carried a torch for many years and who has just come back into his life when the story starts; the other is the troubled and unpredictable Verity (aka Eve) who makes frequent, contradictory (and unromantic) demands on his attention and sympathy. The tensions and misunderstandings surrounding his encounters with these two women (encounters which are further confused by interventions from local solicitor and love-rival Peter Cadogan) provide the main narrative impulse for this engaging and quite complex novel.

Geoff gets on well enough with other women: two colleagues at the library where he works; an ex-girl friend he sometimes runs into; and a mutual acquaintance from a drama group he and Helen once belonged to. But he appears to get little support or encouragement from any male associates. The only other men that he seems to see with any regularity are the rather pompous and strait-laced neighbour from whom he rents his flat and the three other members of a semi-professional jazz band he plays in. Geoff’s music is very important to him; but he recognizes that jazz is the only thing that holds the quartet together; they have so little else in common that it would be misleading to call them friends. It is hard to say whether Geoff’s lack of any close and easy male companionship is meant to be typical of the situation of twenty-first century single men in their late thirties. (Geoff shares his solitary home life with a small black cat, something which is hardly a cliché of bachelor existence.)

It is perhaps because of the limitations in his social life that, although plenty of conversations and communal gatherings do occur, a good deal of the narrative seems to go on inside Geoff’s head. We hear his (very interesting) thoughts on what his music means to him and how he has taught himself to take satisfaction from being a ‘competent’ saxophone player who is well aware he can never be more than a mediocre copy of the great players he admires. We also eavesdrop on his frequent interior monologues of dissatisfaction with himself and his failed attempts to gain Helen’s favourable attention or to grasp what it is that Verity really wants from him. As the story develops, Geoff finds himself caught up in the consequences of some shady business dealings. He is not himself involved in these and so we chiefly learn what has been going on through Geoff’s internal deductions as he pieces together fragments of information he picks up from different people. In this respect, the novel is a little like a ‘whodunnit’; but Lucas evidently does not feel obliged to tie up all loose ends in the manner of a drawing-room denouement at the end of an Agatha Christie mystery.

When the action takes place outside Geoff’s thoughts it is very often in the form of conversations in bars and restaurants. A good deal of wine is poured and consumed in the pages of this book, sometimes in quantities leading to regrettable consequences; and likewise a lot of food is thoughtfully chewed and swallowed by characters needing to pause before answering an awkward question. Geoff’s own solitary reflections often take place while he is trying to concoct a half-decent meal for himself in his flat. Lucas tackles all these food-related conversations pretty well and he has a good ear for naturalistic dialogue and a knack for wry humour. He is clearly familiar, for instance, with the kind of banter that is exchanged between musicians. He also handles phone calls (of which there are quite a few) in rather a neat manner (reminiscent of what is sometimes done on stage) where we are only given one half of the conversation together with interjections like pause or slight pause and must infer what is being said at the other end.

As well as having jazz as a significant and interesting sub-theme, the book also uses Geoff’s job in a library as an excuse to introduce occasional discussions about the art of novel-writing and to indulge in speculations on the extent to which fiction mirrors, or can influence, real life. At one point, Helen has some fun at Geoff’s expense when she likens one of his elaborate theories to the plot of a Georges Simenon story – and then recalls how Simenon once agreed to help the police with a real case and made a complete hash of it! I may of course be wrong, but I take it that the novel’s title is itself a reflection of this aspect of the book.

The book is rather densely packed with secondary characters, some of whom disappear for many pages and thereby risk causing momentary puzzlement to the reader when they eventually turn up again. But they (nearly) all seem to have a part to play in pushing the story forward, even if some of them are rather ‘stock characters’ – braying guests at a golf-club function, a small-minded member of a library user’s committee and (in contrast) a plain-speaking and upright old working-class socialist.

There will be no plot-spoilers in this review. It is sufficient to say that the book creates an interesting situation but – unless I missed something – some of its story lines seem to me to remain partially unresolved. This after all is the way of real life; and the undoubted pleasure of reading The Plotting lies as much in the well-paced and largely believable telling of the tale as it does in any discoveries and sortings-out that are delivered by the final chapter.