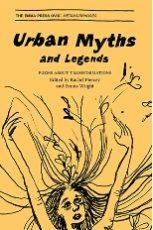 Where does one begin to comment on or review such a delightful and innovative take on the work from Tales of Ovid as portrayed in Urban Myths and Legends published by Emma Press 2016?

This breath-taking book offers every lover of poetry – and those who do not know much about the lure of the poem – a surreptitious look into the world of myths and legends. Every poem has something to offer even the most cynical of readers. But if you’re reading anything from Emma Press then you’re in good company because, although they are a small publishing company, they have quickly established themselves on the poetry world.

Urban Myths and Legends contains poems about transformations, often taking the work of Ovid as the central theme but sometimes deviating from this. For the purposes of this collection ‘metamorphosis’ translates as ‘transformation’. This implies a subtle change in definition; and in my Thesaurus, the words ‘revolution’, ‘makeover’ and ‘change’ are listed among other words for transformation.. The poems here are makeovers, transforming the world of myth into everyday language and experiences. The drawings throw another light on to the poems. Even though there are only nine drawings, they enhance the telling of the tales and take us back into the world of Ovid, since the titles of the drawings come from that period in Roman history.

The opening poem to the collection is ‘One of Those Things’ and the first stanza comments quite naturally:

as if it were a fairly normal occurrence. This matter-of-fact take pulls the reader straight into the poem. Where is this going? And then things become quickly weirder, more disorientating so that …

all of which takea us further into fantasy and mystery. This is a good opening poem as an introduction to the collection for the poems all develop along the lines of the theme of just one of those things as the world becomes more weird, often frightening and appealing to those of us who love a sense of deviation and danger. But nothing seems to surprise the teller of the tale. Only the reader is surprised or even shocked.

The poem ‘In My Brown-Eyed Girl’ I found particularly disconcerting. The poem begins harmlessly with two women washing up; but then in the second stanza they are swapping eyeballs,

Once the eyeballs are exchanged they sit down to tea and drizzle cake. The picture that accompanies this poem is more disturbing than the poem. It’s of a hunter about to spear a polar bear through the eyes. But the poem is written as if the words or situation are all perfectly natural for the women washing up. It is written with ease and with authenticity.

In this anthology every poem earns its place. Each one is strong in terms of content, style and technique to pull off those surprises. It’s unusual in an anthology not to find one slightly weaker poem than the rest but that doesn’t happen here. The editors have worked hard to keep the pace and structure of the book highly suggestive and intriguing. The poems vary in style from a prose poem to Kathy Pimlott’s ‘Portrait: Landscape’ where the poem has been printed on two pages in a landscape form.

This is an excellent anthology for children and adults. Well, only some of the poems re for children!

Every poem is a story to be passed on. Rohan Chhetri’s poem, ‘Expulsion from Eden’ haunted me in particular:

Once again Emma Press have intrigued and delighted us with this fascinating and refreshing take on myths and legends.