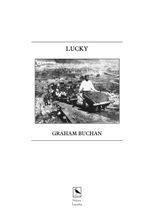 Graham Hardie considers a collection by Graham Buchan in which some rather sombre themes are balanced by welcome lighter touches.

Graham Buchan’s collection of poems Lucky is an elaborate portrayal of death, murder, loss and grief. Occasionally, it has glimmers of relief in palatable humour in poems like “But Then” and “Drink Like A Fish”.

Much of the book deals with the Nazis, The Second World War, Revolution and their subsequent horrors. It portrays the brutality of such incidents with a straightforward and at times rudimentary poetic manner and style. This can be seen in poems like “The Revolutionary Leader’s Guide To Basic Vocabulary” where the first three lines read Defend the revolution – commit murder/ Class enemy – someone to be murdered/ Bourgeois – someone to be murdered and this sets up the rather morbid tone from the start of the collection, (again illustrated in poems like “The Leader’s Wife” about the execution of a tyrant and his partner)

“The Road From Konigsberg” deals with the approaching Russian army from the east and is brutal in its honest description of the situation faced by those awaiting this onslaught e.g. dear Lotte had killed her/ children and herself. However, it becomes rather relentless for the reader, and after quite number of poems on similar subjects, I’m afraid I found myself skipping the occasional poem about murder, death and suicide.

Buchan does not, in my view, make full enough use of his poetic imagination when dealing with dark subjects. There are few examples where he engages the reader in ways that might heighten or stimulate their imagination; the language is too stark, too concrete and too real. There are some striking lines such as Death in her silver shoes/ perfumed on the night or and at the end/ at the very end/ the celesta/ the beautiful ethereal celesta or Kill a man and you kill a universe; but Buchan too often fails to activate the senses of the reader with diction that inspires an element of curiosity, interest and mystery in the unknown. He is too bleak and frank with the description of his themes.

On the other hand, however, I thoroughly enjoyed the more quirky and short poems like:

In these examples Buchan shows us more of his poetic skills, as there is a unique and singular depth to the creation of this piece. It contrasts sharply with the extremely bare approach of the earlier poems which arguably allow little space for the audience’s imagination.

Overall Buchan does not do himself justice in this collection. His subject matter, while worthy of attention, is often dealt with so starkly and brutally that it negates its impact and so becomes repetitive. The redeeming features of this book occur when Buchan loosens up, and shows us that he is capable of making excellent use of metaphor, simile and poetic imagery. This gives the reader relief from his bleak and often morbid themes (which have been written about by other poets). In conclusion, while Buchan may not bring much that is new to the table of humanity at which the tragedies of war, grief, sorrow and suicide sit and eat, he does succeed in offering us some entertaining insights on wider and more positive themes of life and love.

Graham Hardie has had poetry published by Agenda, Shearsman, Markings, The David Jones Journal, Gutter, The Interpreter’s House, Cutting Teeth and online at nthpostion. He is the founding editor of Osprey www.ospreyjournal.co.uk and his third collection The Medicated Soul has just been published by Etrrick Forest Press.