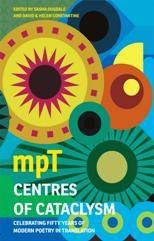 Richie McCaffery admires the range and scope of an anthology celebrating half a century of Modern Poetry in Translation.

Where to begin with a book that weighs in at nearly 400 pages and anthologises the poems and translations of maybe 200 poets or more? The sheer range and polyphony of voices in this collection is dizzying and, having read it, I am pleased to see so many languages and cultures represented. So many poems in so many languages rendered into standard English or dialects of English and so many shared experiences or emotions – it makes me think that perhaps poetry is that elusive, sought-after thing: a universal language that speaks for and from all corners of society. But there are also poems here which deal with events some of us (myself included) could not say we have any experience of – such as conflicts and wars; and much of the book is taken up with the deadly serious matter of poetry enduring even after violence, bloodshed and tyranny. These poems are urgent missives from zones that we may never have seen or known, but we must read them.

This may seem strange for a book that posits itself as a ‘celebration’ and it is true that poems of ‘cataclysm’ take up much of the book, underscoring Modern Poetry in Translation’s continued presence and role as a place for poetry’s survival above all else. I’ve heard some people dismiss translation as an activity taken up when the poet is out of original ideas or money, but this is simply not the case here – in fact editor Sasha Dugdale is convinced that exposure to the poetry of other countries can only stimulate more original poetry in English. There is a feeling of utter necessity to most, if not all, of these poems and the pains the translators have taken to bring them to new audiences.  I remember once having some translations of modern Dutch and Flemish poems knocked back by the magazine for being too light-weight, and now I understand why. That is not say there is not celebration and humour in this anthology; but it is of a Brechtian kind – where humour is done in earnest and earnestness can be humorous.

I wholly support this book and what it represents, but with so many voices on offer, it almost seems invidious to point out the poems that really struck me. Before I do praise any poems, I’d like to get some minor criticisms out of the way first. While I used the book mainly as an opportunity to come into contact with new poets and stories I hadn’t already encountered, I also was drawn to those I already knew quite well. I was delighted to see the great Gaelic poet Sorley MacLean represented with a poem (‘LIV’, or in this case ‘Dawn’) from his important sequence Dain do Eimhir. I am really not sure what Cameron Hawke Smith’s rendering adds that MacLean’s own perfectly serviceable English translation does not already offer. It seems to me that Smith’s version follows MacLean’s too closely and then occasionally veers into a different image or phrase, almost out of, what I feel, is self-consciousness. It is also a shame to see in the translator’s notes that no information is given about where this MacLean poem came from. While we are on a Scottish note, I’d also like to draw attention to Paul Howard’s witty rendering of Belli’s ‘The Good Life’ into the Yorkshire dialect. This works well, and Belli’s work lends itself to vulgate forms, because this has already been tried and tested. The Scottish poet Robert Garioch (1909-1981) translated hundreds of Belli’s sonnets into his Edinburgh demotic and they are now considered Garioch’s lasting achievement. I find it hard to believe that Howard would not have known this, so an acknowledgement of Garioch’s hard, pioneering work would not have been out of place here.

As I have already said, I am gravitating towards what I already know and another reviewer will of course pick up on radically different things because the book contains so much. I was keeping an eye out for Dutch/ Flemish poets and found they are well represented (good to see an Eva Gerlach poem in translation) It was wonderful to see David Colmer’s faithful (in terms of wacky typographical layout) translation of one of Paul Van Ostaijen’s Dadaist poems, ‘Dead Sunday’. It is also worth mentioning that it is not purely translations of poems on offer here, but prose pieces and translated speeches. I was perhaps most pleased to see the late Michael Hamburger being well represented and acknowledged, particularly with a moving short memoir by David Constantine. I think Hamburger’s great worth and value, as both a poet and translator, is sometimes at risk of neglect in these fashion-conscious and careerist times.

There is simply no room here for me to praise all of the new discoveries I have made across the spectrum from polemical and protest poems to elegies and love poems. I’ll just single out one, from an Austrian poet called Paula Ludwig, translated from the German by Martina Thomson. The poem in question is entitled ‘When you return it’s always…’ and while it is much shorter than Neruda’s ‘Every Day You Play’, it nonetheless reminds me of that poem, yet I find this even more moving: