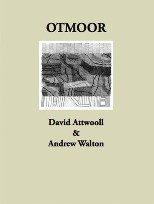 Otmoor is an area of wetland just north-east of Oxford that seems strangely wild and remote to quote the inside of this small collection of poems. The book contains the reflections of the poet David Attwooll and the drawings of Andrew Walton based around the myths, historical events and the changing landscape of the moor. There are only thirteen poems in the collection and I will review a selection of them to give a sense of their poetic value and quality.

“From Beckley Hill” is obviously a poem about a painter in the process of painting/drawing what he sees from Beckley Hill. It is a simple poem and its use of language is elegant: baits his brush with Terraverte, Indian Yellow / Hooker’s Green Lake and the current of sunlight pulls colour left to right. the bruised blue rim of hills and the moor’s open bowl are images I found arresting, appealing and engaging; and they succeed in setting the scene, by creating a realistic visualisation of the vista. My only criticism of the poem is that it could do with more depth, be more emotive and perhaps express the artist’s feelings at what he is witnessing. Consequently the poem, though working on a descriptive level, lacks a quality of emotional depth to create more lasting impact or a sense of intrigue.

The second poem is “Otmoor” the actual subject matter of the book. It works because it generates a coherent sense of atmosphere of what this place is like – a tightening tide felt/here in country’s navel / a hundred miles from the sea are the opening lines which impressively set the scene and a pill quaking bog is another basic but effective image. I can imagine this wetland now. This bog contains reeds / layering of sedges and coarse grass; and the further observation at the moor’s edge /a red-eyed radio mast makes this arena come alive for the reader. The radio-mast brings with it the connotations of man’s unwanted presence and intrusion amongst nature’s unique splendour.

I like the picture evoked by the lines waterbirds rehearse/ their repertoire of impressions which is poetic in its use of personification, continued by felt mallets / striking a marimba. The poem ends with a chatter of circling stars – a potent and original image; its almost as if the bog is there on the page.

The poem “The Binding of the Moor” chiefly works as a piece of history, describing how the gentry’s men to bound her with fences and drained her with ditches and subsequently forcing us all out. As a consequence, there was a violent protest led by men with blackened faces and a thousand folk who pulled down fences in spite of the “Riot Act”. Sixty six of them were arrested. As a piece of history it is interesting and brings character to the wetland, but I felt it suffered from an over use of a prosey style.

“Flora” is an excellent poem in which the use of occasional rhyme works well – May Day, Greenway and the description of picking flowers and the ritual of this holy day on the moor and the surrounding area – and evokes a genuine poetic appeal to the senses as air and the land smell sweet and ripe. The metaphor The ancient rood is dressed in green / shaping Her waist on May Day is splendid, while Behind children’s shouts you can hear the past is a powerful image and concept. Moorish men’s bells and stamping feet all contribute in expressing the notion of a special occasion in the mind of the reader. This is a quality poem, highly descriptive and with a childlike innocence in its tone.

The best poem in the collection is the “The Painted Floor”. It is laden with mystery and myth: sees seventh magpie; a girl not a moonchild; a fletcher’s goddess and

These are all lines which illustrate the magic encased in Otmoor, a lasting legacy, a fable perhaps and this an evocative poem that works on every level.

The poem “Flood” does as it says on the tin, and is a historical poem about a flood that engulfed the moor. “Wartime” describes the poet and the artist sitting at the moor’s edge reflecting on world events (Iraq, Gaza, Ukraine) . They are near an MOD range from where they can hear rifle fire. Metaphors like dragonfly helicopters are slightly cliché, but I like the second half of the poem with the picture of whole arias from operas sung/by Italian POWs who were once in the ditches below, digging, as the mother of either the poet or the artist cycled past and heard them. This is a nostalgic and earthy memory of bygone days, which greatly appeals to me.

do little to add anything of significance to the general picture of Otmoor generated by the stronger poems like “Flora” and “The Painted Floor”.

In conclusion, this is a concise and at times intimate portrait of this particular moor, evoking its many facets: history; barren beauty and myth. However the drawings which accompany the poems, while quite concrete and substantial in their own right, seem to me to be rather too abstract to add any particular meaning to the collection, and lack any obvious connection to the moor the poems are describing. Overall though this is a satisfying volume of poems which makes me want to visit Otmoor one day.