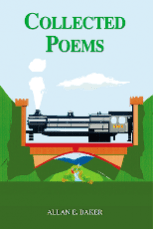 Paul McLoughlin finds that the poems of Allan E Baker, although carefully crafted, can still sound as though they came naturally

Allan E. Baker was a member of a workshop group in the Midlands, which contained some weighty names. Everyone was delighted if Allan drew the final slot, star of the show, because there was never any question of his work being altered in any way, let alone improved. His unique readings were part of the overall achievement, and everyone there knew it would be perfect on arrival. A similar piece of perfection may be found on the back cover of Severn Press’s most welcome Collected Poems. The blurb’s in prose, of course, but is as richly entertaining as so many of the poems. Here’s how it begins: Allan E. Baker, the son of a shoe factory worker, was born in Broughton (near Kettering) in 1924. He moved to Kettering (near Broughton) in 1931 and then to Pytchley (near Broughton and Kettering) – where he hopes to stay for the rest of his nomadic life. A few poems in and no one needs telling the blurb’s the work of the poet, whose play on place reveals how important it is to him and his poems. For sure, it is rare to find someone exploiting locality and local idiom to such marvellous effect.

Also revealing of the poet is that he did not keep copies of his own poems, a carelessness that will no doubt be met with incredulity by today’s up-and-comers, whose eyes, from the time they are first opened to poetry, are trained on its prizes and how they may be won. Which is not to say that Baker didn’t enter competitions; poems of his may be found in the National Poetry Competition Anthology, 1987 (‘The Lorry’) and the Poetry Business Competition Anthology, 1993 (‘The Assignation’), while ‘The Phonograph’ won a prize in the Cardiff International Poetry Competition, 1991. He published three short pamphlets during the late ‘eighties and early ‘nineties, and this Collected comprises poems gathered from these and a range of willing sources, something the poet is thankful for on his Acknowledgments page.

The poems are arranged more or less chronologically, which necessitates the reader having to wait a while before encountering the brilliant best of Baker; but there are still gems to be had among ‘Poems 1980 – 2000’. Almost from the start they tell of a world refracted through the eyes of a child. Here’s ‘Mrs Holland’s Fretwork Tramcar’ in its entirety (it’s painful to quote from Baker’s shorter poems selectively):

If you like this kind of stuff (and I wonder about you if you don’t), then order the book right this instant, and return to the review later. This poem’s mix of wonder and the wit of memory is everywhere and Baker’s way with it ensures his achieving a kind of simplicity that, in eluding the grip of nostalgia, is rarely encountered.

Baker is good with endings, too; his poems usually pack a closing punch. All poets know about the difficulty of endings while claiming to know a good one when they see it. They’ll come upon page after page of them here. The Mrs Holland poem is only one example. Try this one from ‘Paradise Lost’:

And they’ll get to know characters (childhood friends and girls and shopkeepers) and individual streets and passages (like Wellington Street and the jitty) and, perhaps above all else, the poet’s love of Hornby trains. Many of these poems had me wiping away tears of laughter (this is literally true, not an affectation) but there is also a warmth underlying even the funniest of them which lends the entire book a seriousness that cannot be missed. A sense of wonder, adventure, accomplishment, and a desire to learn pervades the best poems so they convincingly answer the tricky question of whether they evidently need to have been written. Baker is so good at these kinds of poem, however, that he runs the risk of becoming a parody of himself (most of the poems adopt a child’s perspective) – but the distance that appears de rigueur in so many modern collections is not on his agenda, and the poems are the better for it. Sadly, the poet died shortly after his ninetieth birthday – only weeks after this book was published. It deserves to be widely read, not for any academic reasons of importance, or any similar nonsense, but because what Baker shares with, say, Jim Burns is that the verse came naturally (however hard it was worked at). And the poems are good, which is reason enough for reading them. Let’s close with a later poem, ‘The Speed of Light’, not least because it issues from the kind of humility I like: