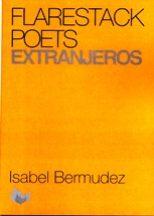 In her poem ‘La Casa de La Candelaria’ Isabel Bermudez recalls how in her Earls Court flat she brought out a fruit bowl to her great-aunts who were on a visit from Colombia. It was a:

Extranjeros is a debut pamphlet exploring the remnants of memory through the eyes of a Colombian-born poet. The tone throughout the poems is elegiac. Written in free verse and spaced out in two or three lined stanzas, the English is occasionally interspersed with Spanish words and phrases which are sometimes translated or made clear by the context, often left for the reader to work out, thus contributing a sense of fragmentation and strangeness to the language itself. The untranslated title means ‘Foreigners’ and the poems express the exile’s desire to recapture a past, while recognising that past may never have existed.

Right from the start the poet sets up the unreliability of memory. ‘The Fruit Basket’ is a portrait of the aunt who is not what she used to be, like the broken cord holding up the broken blind in the opening line. La tía talks of when her brother was elected Presidente which may or may not be true, and of orchids and keys – at which point the poet asks: Are these real orchids? Real keys? And in a later poem the image of keys recurs the keys that are of no use to anyone/except perhaps to unlock doors to what is lost to us.

The poems are mainly peopled by family members, often elderly or confused, as well as by the poet herself – first as a child hearing snippets of a strange adult conversation that she rejects at the time but strives to hold on to in later life, and then as the Chilean emigré in Cuba caught between what’s gone and the reckoning of return. They are poems of loss: the loss of family, country, heritage experienced by every foreigner, migrant and refugee. One poem, Viento de Agua, addresses the disappearance of language itself in the words and phrases, now rarely used, that were once commonly spoken by the grandparents and great-aunts of the poet.

A reviewer on the back page of the pamphlet feels in these poems the deep, heavy shades of a hot country but although parts of Colombia are tropical, La Candelaria, the historic centre of the Andean capital Bogotá, where most of these memories are located, has a relatively cool climate. However, the memories are warm and the writing is sensual. The poet’s Proustian madeleine is Cilantro, coriander, magical herb of my childhood that lifts the sancocho stew, and the poems are rich in detail of place: the transistor wail of vallenatos and the street cries of umbrella -sellers, landscapes of plain and sierra, rain that cuts off electricity and telephone in fits and starts, night skies, flores de amor – Agapanthus.

The memories are from a loving and privileged personal history. The other side of Colombia’s reality is not engaged with in this collection: the forty year civil war known as ‘La Violencia‘ , the political corruption and brutality, the poverty and more recently the drugs trade. Only in one poem, ‘Birthday party’, do they appear but are not dwelt upon:

In the final poem ‘ Uno más’, dedicated to her memory of an exiled Spanish politician, Isabel Bermudez describes seeing him on a London screen as a young man

and how hearing his voice she sees

With that final line the collection ends with the extranjero’s desire and need to catch hold of a past that may never have existed, one where everything was once intact, and to continue the search for what is lost to us.

A plea to Flarestack: it would have been helpful to have had a Contents page in this attractive pamphlet!

Caroline Maldonado‘s publications include her pamphlet, What they say in Avenale (Indigo Dreams Publishing,2014) and a co-translation with Allen Prowle of poems from Italian by Rocco Scotellaro Your call keeps us awake (Smokestack Books, 2013).  She lives in London and Italy.