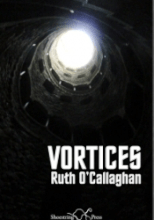 Vortices is split into six sections, ‘Prologue’, ‘Inheritance’, ‘The Inheritors’, ‘Re-Generation’, ‘Disintegration’, ‘Culmination’, each exploring different voices around a central theme with a loose narrative running through. The first section has a ‘Hotel Owner’ worried about guests bringing dirt onto his marbled floors in a hotel inherited from his father,

This contrasts with the view of a guest, ‘Menlegus Josef.’

Even though the stanza layout is similar, the different styles of vocabulary and different rhythms mark these as separate, distinctive voices. There lies the strength of a many-voices approach, the poet is not restricted to her own view and letting readers see a situation from all angles gives the readers space to draw their own conclusions without feeling manipulated into sharing the poet’s view.

In the second section there are voices from the First World War from politicians, soldiers, a female factory worker and a trench rat. This is complemented by the third section which moves on to the Second World War. The second stanza of ‘No 3 Tram’:

The speaker feels excluded from playing with the boys in the camps without understanding why he can’t be allowed to join in. He doesn’t understand why he has to stay in or what generated the ash clouds. Through the child’s complaint, the reader is being invited to question why the child doesn’t understand and how would an adult explain the ash and the exclusion.

The ‘Re-Generation’ section moves on from war. In ‘Slievemore’

It’s prefaced by the quote from Adorno, To write poetry after Auschwitz is barbaric. The poems in this section explore a search for faith and a re-finding of human spirit and an ability to endure. The next section, ‘Disintegration’, looks at the barriers people consciously or unconsciously put up towards communication and intimacy, for example, in a marriage where husband and wife have forgotten how to be friends. The final section, ‘Culmination’, starts with quotes from former Prime Minister Tony Blair about the war in Iraq. ‘Middle East’ is an apparently simply couplet,

No matter how much the past is remembered, the lessons are not learnt and wars flare up again. These poems are vital: they look unflinchingly at evil deeds, exploring them from different viewpoints, allowing voices that are not normally heard to speak, but also keep a faith in a human ability to endure and re-grow.

Emma Lee’s most recent collection is Ghosts in the Desert (Indigo Dreams, 2015). She was co-editor for Over Land Over Sea: poems for those seeking refuge (Five Leaves, 2015) and blogs at http://emmalee1.wordpress.com.