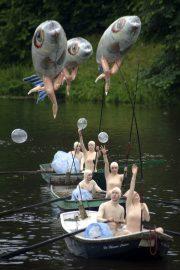 As if an extraordinary imagination for fantastic, unsettling monsters and a genius ahead of his time for sensitive, naturalistic depictions of ordinary people weren’t enough, Hieronymous Bosch also had a modern knack for successful branding.

His family was from Aachen (Aken in Dutch) in modern-day Germany, but Jeroen van Aken opted for the Latinised version of his first name and identified himself with the town where he lived and died: ‘s-Hertogenbosch, known as Den Bosch. Commissions from the wealthy burghers of the thriving commercial town promptly came flooding in.

From his copious output, some 45 paintings and drawings survive. The exact number is disputed because of doubts about the authenticity of some works.

The brainwave of the North Brabant Museum, driven by the passionate enthusiasm of the mayor of Den Bosch, was to dare to try to bring home as many of Bosch’s works as possible from the far grander museums that now own them for a retrospective for the 500th anniversary of his death.

The North Brabant Museum had no Bosch of its own to trade, but instead helped to set up the Bosch Research and Conservation Project for an exchange of knowledge and restoration techniques.

The result is triumphant: an upsurge in Bosch scholarship – as well as a boon for civic revenues.  Museums such as the Louvre in Paris, the Prado in Madrid, the Accademia in Venice and the Metropolitan in New York agreed to lend their precious Bosch for an event that has fixed Den Bosch and its Bosch experience on the international tourist trail.

Dismantled triptychs have been re-assembled and fragments placed in context. The only drawback is that the size of the crowds means it remains difficult to get an overall sense of the whole.

While 36 of Bosch’s works – 17 panels and 19 drawings – have made their way to the retrospective, a notable exception is The Garden of Earthly Delights, Bosch’s most famous work, housed in the Prado.

By way of explanation, the North Brabant Museum drew an analogy with Rembrandt’s Night Watch, which never leaves the Rijksmuseum in Amsterdam.

But the Prado has lent Bosch’s Haywain, a fabulously rich narrative of the journey from original sin through all the temptations of life and down into hell, where one of Bosch’s half human/half fish monsters flounders on its back in the foreground.

Meanwhile, a cart, bulging with hay that can blow away in the wind or burst into flame, symbolises the transience of earthly pleasures.

On the outside of the shutters to the triptych, The Wayfarer wends along a narrow path through a landscape steeped in murder and other crimes.

The Prado also provided a meditative Saint John the Baptist against a backdrop similarly redolent with danger.

Moreover, the entire exhibition later this year will move to Madrid, historically linked to the Netherlands by Spanish occupation as well ownership of its art.

Until May 8, you can relish the once in a lifetime thrill of experiencing Bosch’s works in the place where he crafted them and then roam the streets where he lived, worked and died.

There is as much continuity as change.

The market place, where Bosch and his wife lived, bustles with trade around stalls essentially the same as those depicted in The Cloth Market, a work of one of Bosch’s anonymous near contemporaries owned by the North Brabant Museum.

Equally, the people in Bosch’s crowds craning to see Christ being led to the cross or drifting to their peril on The Ship of Fools are not really so different from the visitors jostling their way to the front to peer through thick glass at carefully restored brush strokes.

Even Bosch’s deformed combinations of sinful man and beast, which teem maliciously through his landscapes and are reproduced in the shop windows and streets of Den Bosch in full 500th-anniversary Bosch fever, seem as much modern as medieval.  Could that be because of the surrealists and the pop artists and all the others who have tapped into Bosch’s imagination over the past 500 years?

Whereas Bosch’s breathing, feeling characters have direct emotional appeal, the output of many of his contemporaries is by comparison empty and remote.  The exhibition draws the contrast by showing works by his followers and other artists of the time. A quotation Bosch added to one of his drawings sums up the difference: “Poor is the mind that always uses the inventions of others and invents nothing itself.”

Apart from the insight the Latin quotation gives into Bosch’s self-awareness, the drawing itself shows his skills as a draughtsman, which rank among the discoveries of this exhibition.

Among the finest drawings is The Owl’s Nest.  If Bosch’s humans are often turned into beasts, his owls – a recurrent presence, looking down on humanity in many of his works – are almost human. The subject of The Owl’s Nest is a trio of owls, one looking up and another, wings spread, looking down on a baby owl in the hollow of a tree.

One of Bosch’s greatest contemporaries Albrecht Durer was another consummate draughtsman, whose muscular Saint Jerome in the Desert is included in this exhibition to help us understand Bosch’s treatment of his namesake saint (Jeroen in Dutch and Hieronymous in Greek/Latin are versions of Jerome).

The juxtaposition throws up the contrast between the straightforwardness of Durer and the tortured complexity of Bosch, whose Saint Jerome at prayer is prostrated in a setting bristling with chaotic, weird menace.

Saints in general are a major theme.  Bosch has also left us a giant Saint Christopher, carrying the Christ child and the weight of the world on his shoulders as he crosses another landscape of sinister threats lurking in the detail.

The exhibition’s section on saints leads on to The End Times and ultimately visions of the hereafter, positive or negative, painted on to an unusual black base layer that adds intensity to the drama. They leave the impression that no-one has depicted more feelingly than Bosch the chasm between hope and despair.