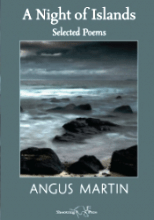 Richie McCaffery is impressed by originality of vision and authenticity in the poetry of Angus Martin.

I am aware that I’ve reviewed quite a lot of Shoestring Press publications recently, and it is not out of any bias that I wish to keep hidden from the reader, but rather that I am becoming increasingly convinced that, for me, Shoestring Press is publishing the best and most valuable of contemporary UK poetry. That is not to mention the many translations of world poetry the press also publishes, such as Donald Gardner’s translations of the major Dutch poet, Remco Campert. The latest publication under scrutiny, Angus Martin’s A Night of Islands confirms to me that the value of the press is going up, both in terms of its authors and in the quality of its books. The design and type-face wizard, Gerry Cambridge, has worked his aesthetic magic on this particular book, and I am not sure if this is a one-off job for Cambridge or if he is to be the in-house designer and typesetter from now on, I hope the latter is the case.

However, let us come back to the true focus of this review, Angus Martin and his poems. Reading this book gives me a great sense of guilt, because I have read Martin’s first collection A Larch Plantation (1990) and while I enjoyed it, I can only assume it did not leave a lasting impression because it has simply sat on my shelves until I came to review this latest book. I had come to associate Martin more with his friend, the late great Gaelic poet George Campbell Hay, whose poetry Martin has worked hard to bring to wider public and critical attention. It is a characteristic of true poets that they can put aside their own work and risk its neglect for the sake of a friend whose work really ought to be better known. Sadly, too many poets these days are simply focussed on themselves. But it is for this very reason that I had underestimated the power of Martin’s poetry – namely that I had come to know him as a minor poet and a campaigner for Campbell Hay’s legacy. How very wrong I was to do so, and my pangs of guilt come from reading A Night of Islands which shows me that Martin is a poet of the first water.

But what is it that makes Martin’s work stand out? Many of the poems here, speaking in terms of subjects, are quite standard: elegies, ballads, sea, landscape, meditations on death. The form of the poems also is rather unchallenging and conventional – tightly written, musical and lyrical poems with some in Scots along the way, to vary the linguistic texture. All of these things show Martin to be a very good, practiced craftsman, but they are not outstanding in themselves. So what is it then that makes me rate these poems so very highly? It has something to do with the way Martin consistently sees and experiences things in striking ways and then translates that into words and unforgettable images. For instance the horizontal to a fallen mast means death to you in ‘The Mast’; or a people that could be detained by the richness of a culture (‘This Land of Mine’); or in ‘Places’ where the speaker reflects on the dying and dead farmers who knew so many place-names for their land and now:

Human beings in Martin’s poems become brains-on-forks and a raven is shown to be blackening a crag with waiting (both in ‘Places’). It is clear that Martin derives no solace from the natural world, as it is forever trying to expunge his image and prove his otherness, such as in his encounter with a toad:

There are many examples of Martin’s unique vision, but I think I can also add another dimension to my argument here that Martin’s poems are far from your average. The second issue seems to do with the authenticity of lived experience, or the way the poems feel (whether or not they feel ‘earned’ to the reader). For instance I recently reviewed (for Northwords Now) J. O. Morgan’s curious verse novella In Casting Off (HappenStance Press, 2015). While I really enjoyed this book, I had the inescapable feeling that it was a really good yarn being spun in front of me, and not something of which the speaker/ author had direct experience. However here, as John Killick’s foreword tells us, Martin really knows what he is talking about for he has worked the sea for fish and the ground for provender. He has trodden the streets and byways to make a living. I am not usually cozened by these neat rather self-mythological biographies that poets like to tell of themselves or have others tell about them (the ‘heaven-taught ploughman’, the ‘roofer poet’, the ‘journey-man stone-mason’ etc). Here it simply feels right, and rightly earned, for when Martin speaks about countryside and seaside issues, I believe him, and this is a hard thing for a poet to achieve in a sceptical reader. Compare, for instance, Simon Armitage’s ‘About His Person’ with its neat little inventory of a dead person with this:

While many of these poems deal with bleak and comfortless circumstances that remind me directly of the poems of Alasdair Maclean (From the Wilderness), Martin proves to be more of a rounded human-being with humour and affection occurring throughout his poems. His poems for family such as ‘Four for Sarah’ really are outstanding: