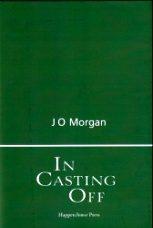 J.O. Morgan’s books are complete things in themselves, and are all different kinds of ‘verse novel’ or ‘sequence’, though none in the same way. Natural Mechanical told the story of an unconventional boy growing up in the Hebrides; At Maldon retold the Anglo-Saxon battle story; In Casting Off is a narrative told obliquely through distinct poem-sized elements, though less oblique than the new book (following this HappenStance one by months), Interference Pattern from Cape: I have only just started that one, and if I stop to read it properly this review will be even more delayed than it has been. My slowness with In Casting Off is perhaps my own problem with oblique narrative, which can stop me while I wonder what narrative is, what narrative poetry is (if distinct), and what this oblique narrative poem is doing as a way of getting information to the reader about what’s going on, or creating ways to make the reader wonder what’s going on and maybe notice something in the unexplained and unspoken.

There is a lot of unspoken, for instance in the gap between the primitive mythic element (people wearing the skins of seals and bears) and the everyday modern but not quite up-to-date (cars, film cameras). There is also anonymity to the characters, whose unnamed presence offers a universality: context distinguishes them clearly enough but they have to inhabit their pronouns more vividly than is usually the case when everyone is always she or he (or sometimes ‘her mother’, ‘the husband’). There is weather, mostly sub-arctic and stormy but also sultry – at the harbour, The summer is short. / The summer is hot; and we also have summer bathing in a lake some way up a mountain. The bears are white ones in the forests / in the hills behind the village: we already know from the beginning that we are in a mythic reality with the human-animal interface, so the reader has to take the location as somewhere similar to Scandinavia or Iceland but in a not-quite-parallel universe, or the mythic is in the minds of the characters, but we have to work that out. In this world, a woman’s body jelly-smeared, slips easily into the suit made of a captured seal’s skin (‘A New Suit’), and in ‘Ceremonials’ a white bear which is a man in a bear skin carries her to a church where they ceremonially take the skins off and dress in clothes. No one considers the couple who blink / from the church out into breezy night; and we are in an everyday story of fisher folk, at least for the time being.

There is a great deal in the book about fish: the seals and bears and people who want to eat them, and how they do their catching and processing of them. The elaboration of detail about fish and fishing boats contributes to the overall defamiliarisation, describing things happening almost in the style of a technical manual or an observer writing a report. Images often work that way, like this one which is almost less an image than a scientific illustration in the physics of bodily movement:

Occasionally this precision works against its own effect:

Warm fish can’t pass through gaps the same way, they can only be metaphorically like liquid metal: but they do have more in common with people. Swimming upstream, a fish balances its small compacted strength / against the world-flow of water, just as her husband cannot stop, cannot allow himself / to drift back with the flow (‘The Current’). Fish on a river encounter the first of many barriers they must unpuzzle (‘Dividing Line’), which is somewhat how the reader feels, taking the information and putting it together to get the picture. There is unembarrassed anthropomorphism not only for fish, their river, the bears and the seals, but also the personification of a woman’s bed that sinks with a sigh as it folds in around her and the chemical particles of photographic film, the excited as well as the dull. Constantly in the book there is a tension between this figurative extravagance and the cool, dispassionate eye with its diction of the resultant fissure; old-fashioned expressions like ‘lest’, ‘save’ (for except), and ‘naught but’ also keep us at a distance from the usual modernist groove, where otherwise the plainness of the style belongs.

About halfway through the book, ‘Game Theory’ is a severe exercise in making strange, in which he is teaching her here / how best to order chance with the walrus ivory discs and sharkskin dice cups of a game of backgammon, not named as such. The game is fate and how we deal with it:

Like the game, the book embodies the arbitrariness of death and human powerlessness, its narrative movement and tone suggesting resignation behind the dispassionate omniscience of its telling. It is a considerable achievement: however, I’m looking forward to finishing Interference Pattern, which looks as if its disintegrative sequencing may be as puzzling, but more by suggestive juxtapositions that look like more fun to work through, and we don’t seem to be in such a bleak landscape. But that’s another story.