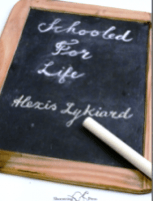 Years ago I co-directed school plays with a man who had an unusual scale for assessment, the topmost note of which was ‘I think we got away with it’. In this age of trivial, pettifogging, pseudo-political ‘targets’ I still think it’s a fairly decent one to have, especially for any artistic endeavour, because even as you come down the scale towards ambivalence (just about got away with it through almost got away with it and so on) you’re always accentuating the positive. In today’s poetic climate, writing a memoir of one’s experiences in education is so brave that you’d be glad of an ‘almost’, and since our poetry establishment wouldn’t entertain it in the first place (because it lacks awe and wonder, I suspect) you’ll be out there on your own.

So well done, Alexis Lykiard! At least someone’s not afraid of being unfashionable, though to judge by the final rant in his small ‘selected’ back in the ’eighties he is probably not one to stand upon points with the establishment, and even in this latest book a shot at the powers-that-were is never far away:

All this I thought before I opened the book. And before I say any more I ought to declare an interest, having just completed a verse memoir on everything educational and/or school-related. No prep school former Radleyan, me, and born ten years after Lykiard, I was surprised to learn how similar our angles and conclusions turned out, but maybe we all should agree about the after-effects of early-learning, whoever sticks it to us, and his take on the poet as one kept in detention to write lines is both terrifying and true.

Lykiard’s twenty-odd poems, some published previously in other volumes, make a short tour of duty by the standards of even a slim volume, and his preference for long-lined blank-verse stanzas, especially in his first section on school-days, coupled with an override of the sharp focus one normally expects of a poem, make this an unusual project. In view of the fact that he hasn’t always written in this way, I have to assume that a sometimes prosy memoir of boyhood was deemed the best vehicle. The second section on the author’s experience as writing workshop leader, ‘British Council Bratpacker’ and some work in prisons lands him unnervingly close to the kind of overview he might have had if he’d worked in mainstream schools, and the poems in this section have a good deal more focus, dealing as they do with ‘teaching’, and are alert to most of the possible objections to this brand of anti-nostalgia, where prisoners are said to be aware:

Overall, it’s clear that we are all marked for life (‘Hermeneutic’) in a context where nonsense reign(s) supreme. One of his earliest experiences involved being framed and then slippered for ‘Cutting a Rug’ which amused his contemporaries enormously in view of its jazz links with jitterbugging among US soldiers here for the war. His memory of old teachers is also strangely universal, especially in certain schools fond of aping the old traditions, be they public, state or grant-maintained grammar:

That first line is an example of unabashed prosiness cohabiting with slick writing throughout the collection, and Lykiard is fully ready and willing to tackle an apologia for a book on such a risky theme:

After alluding to early equivalents to the game of frisby, Mens Sana In Corpore Sano ends with an atmospheric quatrain on a favourite bete noir, the murder of contemporary letters by stultifying cliché:

Except of course that everything points to the possibility that they matter a lot. It’s evident that the anti-stance of any poet is born and fostered in contexts designed for anything-but, and even the absurdities of such brutal childhoods are a breeding-ground for a kind of awe and wonder it’s easier to believe in. How about this for encapsulating boys’ school torture:

No messing, chaps. That’s exactly how it was. Maybe it changed later on when Radley, along with many worthier establishments, allowed the girls in, and we all had to learn to be a bit more grown-up. But that was another story, and we have to tell our own. I enjoyed finding out about another’s very different but all too familiar brand of suffering. There is one rung of achievement above my opening header-line if you delete ‘I think’ and just say that he got away with it.