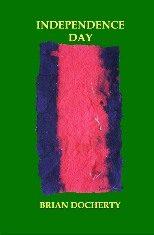 Brian Docherty is a poet with a rather original way of seeing the world. Sometimes this leads him to begin a poem with an intriguing point-blank assertion (which he may go on to substantiate); and sometimes it causes him to veer off from his apparent themes along unexpected tangential digressions. His poems can be enigmatic; and yet they can also have the pithiness of epigrams.

‘Pilgrimage’, the opening poem of Independence Day, displays some of these characteristics together with others that recur through the book. Its first stanza is

From its take-it-or-leave-it initial generalisation we pass to a little light word-play and then to a statement of independence (or even defiance): such ingredients are also to be found again in the pages which follow. (And although that half-rhyme in the third line leaves room for doubt, ’Pilgrimage’ is well-made example of terza rima. Docherty does not use such forms all that often; but when he does he makes a good job of it.)

Docherty likes to put old ideas into a contemporary framework – conflating a description of a magic carpet with that of a mobile phone, for instance. But he can also be entirely au courant in his treatment of, say, cross-dressing (Michael feels like a new man today / but the mirror shows him a new woman) or the difficulties facing border control staff

Occasionally, Docherty’s up-to-the-minute allusions betray him: references to my flexible friend or to a Pope kissing airport tarmac obviously refer to bygone advertising slogans and media images and suggest that a poem was written quite some time ago. No great harm in that, but it is a reminder to all authors that our writing may eventually date us.

The book includes quite a few poems on travel – although ‘Walk/Don’t Walk’ states bluntly that travel books are always out of date – most of which, as the title might suggest, are poetic observations about America. Such observations are typically rather sceptical or questioning. On being told by a TV pundit that America is the world’s 68th Empire Docherty objects

Docherty also warns us that America can be a place of hazards: Sometimes you don’t realise you have walked / into the wrong bar till you have bought a drink. He also has an eye for unfortunate coincidences: and it struck me that in ‘Some Vehicles in San Francisco’ he had rather missed a trick by not exploiting the numerical pun on the US emergency dialling code 911 and the fateful date 9/11. I needn’t have worried however, because three or four pages further on we find

Even when he writes about people and places closer to his London home, Docherty still has the detached eye of an outsider. Indeed, in ‘Proof’, he suggests that – thanks to increasing reliance on digital record-keeping – we are all in danger of being mistaken for outsiders in the midst of our own existence:

Docherty has still more variety up his sleeve. Some effective ekphrastic poems – notably ‘Moonlit Street’ with its engaging opening This sort of place gives realism a bad name – sit alongside some effectively unsettling noir-ish pieces. In ‘Windows’ we are warned that

More ominously, in ‘Dark’, a congregation finds that the church was full for a change and, more surprisingly, someone stood, hands clasped / in front of her, in the vicar’s place. And then, when the lights go out …

The incident at the centre of ‘Wallet’ does not bear repeating; bad enough is the potential cost of not properly checking one’s post as spelled out in ‘Junk Mail’: Like everyone else, I turned this into a verb. / As mistakes go, this ranks with … / … Decca turning down the Beatles.

Most of Docherty’s strange narratives are seen through the human eye or the human imagination. But he has at least one more surprise for the reader in ‘Backcountry Etiquette’ which begins Stop thinking about fish knives Norman and keeps us waiting a little while before revealing that the protagonists are (currently) two grizzly bears (although they might previously have been human). This kind of gentler fantasy also occurs in ‘Radishes’ which describes an immigrant’s eccentric but effective method of traversing Europe and again in ‘A Time Traveller’s First Lesson’: That’s right, you need someone’s permission to fish. / No you can’t fight them for the deer or the land, / we don’t usually do things that way nowadays.

As I read and re-read this book, I noticed a quite surprising number of passing references to the Bible (something that could also be said about the lyrics of Leonard Cohen). This particular strand in Docherty’s imaginative repertoire comes more to the fore towards the end of the collection in reflections on topics like forgiveness (‘Sorry is not the Hardest Word’) or humanity’s place in the great scheme of things (‘Towards a Natural Theology’). ‘Aspects of Religion’ riffs on a quotation from Thomas Aquinas and starts by contrasting two situations: When you burn incense on the altar. / When you burn the altar for the insurance; and the collection closes with ‘Rumination’ based on lines by the poet Rumi and taking him to task about the nature of grace (if grace is a free gift, / how can we ask for more…?)

This is a collection which can be described as dense in both substance and appearance. Most of the poems present a certain uniformity of shape: regular stanzas of four or more medium length lines, seldom covering much less than (and never more than) a full page. Docherty also favours longish sentences in which he can build up his idiosyncratic trains of thought (but it pleases me, as an editor, to report that he is scrupulously careful about matters of punctuation as an aid to clarity.) But even if many of the poems look similar on the page, their content in terms of subject matter is quite varied and Independence Day probably contains even more imaginative twists and turns than I have indicated in this review. Docherty has a distinctive voice and the subtlety of his observations means that his work repays re-reading. His prevailing tone of wry pessimism might be a little dark for some readers, however, and is perhaps best  taken in small doses by those of a sensitive disposition.