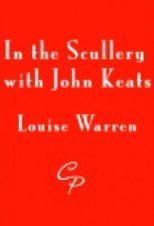 In a 6 February 2009 article in the Guardian, (‘Return of the Pamphlet’) Jackie Kay celebrated the UK boom in pamphlet publications. She observed, ‘The poetry pamphlet has always been a good way for new poets to reach an audience…the connoisseur’s version of a very tasty starter.’ The pamphlet is also a way for poets to show the keenest of their early works, often honed in workshops; to test what direction their styles are taking; and also to announce themselves to poetry peers, no less to friends and family.

Louise Warren is on to something with her fantasies of John Keats appearing as revenant in four poems: in the scullery, the garden, the bedroom and the Underground. These aren’t fey like Wendy Cope’s ‘Making Cocoa for Kingsley Amis’ (It was a dream I had last week/ And some kind of record seemed vital./ I knew it wouldn’t be much of a poem/ But I love the title.), but show Warren’s deft touch with post-modern style that has serious design on the reader’s attention. To illustrate, here is ‘In the Bedroom…’ in its entirety:

The reader is jarred by irregular line breaks, absence of punctuation, syncopated rhythms and internal rhymes; thus forced to read slowly, tasting as the poem goes. Then one appreciates the sly eroticism of breaking fluids, surfaces, virginal buttons; the housewife seduced, ravaged and abandoned by some studly stranger.

Other poems in the collection are moments of recollection, dedication or observation. They follow Emily Dickinson’s instruction to, ‘Tell all the truth but tell it slant– / Success in Circuit lies…’ A father and son visit the 1685 bloody battleground of Sedgemoor, where between them some un-named turmoil exists. (The father: …he might be a corpse blown upwards out of the fields,/ but he stands his ground, soldiers on; the son: The boy’s eyes are squinted with the metal light,// the sun a pressed shilling against the gape./ Later it will be a wound of scarlet,/ all manner of cries.). In the hospital, ‘Sedgemoor Ward’, an old man lies dying: Birds make thin cries from the bare thicket./ One note over and over like a tiny high bell.