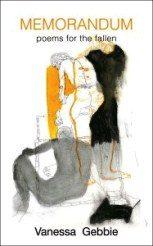 The author of six previous books, including a Bloomsbury-published novel, Vanessa Gebbie now turns her practised hand to a memorial work on the victims of First World War. What should make this collection stand out in an obviously cluttered field is the way she has put her painstaking research to such effective and original use, exploring the cemeteries not only of London and the rest of Britain, but also of major French battlegrounds. Such a poetic tour might have been either overwhelmingly macabre or tinged with sentimentality, but instead is enriched by wit, humour, a real eye for telling detail, and a deep compassion based on genuine interest in the characters she introduces.

The book contains several absolute tours de force which will long remain in my mind. ‘Artillery’, for instance, is an act of poetic time travel which asks us to imagine the reverse journey of an artillery shell, from the moment it explodes, back into the hot muzzle/of the eighteen pounder, through transportation to Britain via horse, ferry and train, to its production in the Filling Factory / At Woolwich, Chilwell or Banbury. That geographical specificity is reinforced by Gebbie’s keen-eyed vision of the teenage munitions worker who completed the manufacturing process:

‘Listen. Listen’ could also be Gebbie’s exhortation to her readers as they begin the journey she has mapped out for them, for we cannot rely on our eyes alone. There is the defiant singing of The soldiers’ ragged choir, St Pancras New Church, which passers-by might mistake for drunken bawling; the barking of orders, often given verbatim and in a novelist’s convincingly demotic tones; the bagpipes of funerals and ceremonies; birdsong on a corpse-strewn field; and the special sound of the silence of war (as in Geoffrey Hill’s ‘A field after battle utters its own sound’). More than anything, though, the book’s landscape is pierced by the constant noise of shells. Recalling Owen’s ‘Anthem For Doomed Youth’, this shrill demented choir lies at the heart of ‘Blindfold’, where a surviving but shell-shocked soldier goes to work on the railways, only to find himself turned back in time – in a rather different way from the one outlined in ‘Artillery’ – by the scream/of a train at full pelt: Ash-faced, he howls Run! blunders in his dark / to find a mask, to clang a non-existent alarm. Not ashen-faced, because that would have been a cliché’; instead Gebbie makes us feel how closely the man is reliving the filth and degradation of trench life, his face covered with the dust from countless explosions, with no time even to wipe it. And it’s not ‘the’ dark but ‘his’, his private nightmare.

However, it’s a nightmare that does find some relief. Here, not for the last time, Gebbie both points up the ongoing suffering of the mentally afflicted veterans, and then provides a crucial balance to the overall tone and message of her collection, by showing the simple compassion and kindness of those who, in one way or another, cared for them. In this case the comfort is specifically, and touchingly, British, and just for a moment the accompanying sound is not the threat it might seem to this tortured soul:

Gebbie involves and embraces so many others apart from the fallen themselves. In ‘Playing Trains’, a bereaved mother, exhibiting a dignity almost beyond belief without ever straying into hackneyed stiff-upper-lip territory, recounts how she received news of her son Maurice’s death in battle. She remembers his childhood games with his brother Fred, and calmly remarks that she has had to inform Fred, also in France, of the news. If we read the line Maurice comes home today out of context, we might think it reflected relief and even elation at a long-awaited homecoming, until we realise she is speaking of his coffin. And just as we persuade ourselves that she does at least have the comfort of her surviving son, a footnote to this poem informs us Fred too was killed five months later. It is Gebbie’s most haunting achievement to turn her own text into a minefield; we never know what we will step on next. But tread carefully though we will, the book’s mounting drama, as we reach the Western Front memorials, and the Somme in particular, pulls us forward with a kind of anguished enthralment.

Possibly the finest poem of all, ‘The passing of Ezekiel Parkes’, appears to have drawn on all Gebbie’s skills as a novelist, as she vividly and heart-stoppingly recreates the life and death of a man who was not even a regular soldier, but a 37-year-old miner recruited to dig tunnels under the Somme fields. We can picture this huge, inarticulate man as he crosses the Channel, having only seen the sea before once, as a child (What’s this? / I don’t like it much). We read his terse letter home to his wife in Derbyshire: Thirsty work. Petrol cans are good / for water. We come up chalky, white as ghosts./ Tell the nippers hello. We watch him crawl along the tunnels he has created, believing them to be no more dangerous than the pits he’s spent his life in; and then we feel the horror and degradation of his end, when a German mine explodes, also blowing up the British mines, leaving him buried in impenetrable chalk to this day. Gebbie reflects:

The collection’s title poem, subtitled ‘Battlefields of the Somme’, is worth quoting in full, for its muted yet awestruck sense of survival balanced against scarcity and littleness, where the words ‘a few’, ‘residue’, ‘too small’ and ‘fragments’ carry magnified significance:

As we approach the centenary of the Somme on 1 July, I can think of no more fitting tribute than Gebbie’s outstanding collection. It deserves a place among the most striking and moving testaments of the last hundred years, and will leave an indelible impression on all who read it.

In addition to regular poetry reviews, Nick Cooke has had poems published in the Sentinel Literary Quarterly, Dream Catcher magazine and the anthology Poems for a Liminal Age, as well as the The High Window Journal, the Agenda journal online supplement and websites such as Poetry Space, I am not a silent poet and The Curly Mind. His poem ‘Process’ was Highly Commended in the Segora Poetry Competition (July 2015). He has had four poems accepted for To Kingdom Come, an anthology to be published in June 2016 on the theme of political killing. He is currently working on his first collection.