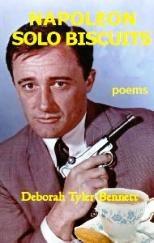 These poems vibrantly bring their subjects to life. Deborah Tyler-Bennett’s skill lies in creating a portrait in words so that even readers who don’t know the subject can still conjure up an empathetic picture and gain an understanding of who the subject is. She moves from personal to researched biographies with ease. In ‘Leaving Zanzibar’, she responds to a TV historian’s comment suggesting that middle classes lives were somehow mourned more than working class ones:

The poem ends by pointing out that those middle class boys,

Tyler-Bennett draws focus back onto the tragic loss of so many young lives, regardless of background. The allusion to Vera Lynn’s song (bluebirds aren’t native to the UK), acts as a reminder of the spirit of optimism, the ‘it’ll all be over by Christmas’ attitude, towards the initial outbreak of the First World War. The assonance in hell and million hints at the scale of loss, underlining the complacency of that TV historian.

The book’s title poem looks back to a childhood hobby of collecting cards from biscuit packs. The cards slotted together to create the faces of the two main characters – Napoleon Solo, played by Robert Vaughan, and Ilya Kuryakin, played by David McCallum – from the TV series The Man from U.N.C.L.E:

Even in nostalgia, Tyler-Bennett avoids hagiography. The poems towards the end of the book turn their focus to more famous lives but refuse to be seduced by the apparent glamour of celebrity. In ‘No Blue Plaque for Johnnie’ Johnnie is the photographer John Deakin (1912-1972) who lived his final days at the Old Ship Hotel in Brighton:

Deborah Tyler-Bennett relishes a larger-than-life personality and an opportunity to show off her dexterity with vocabulary – which is here tamed by rhyme but is more usually tamed by keeping her subjects in focus and describing their lives as they themselves might have done. Her use of rhythm and enjambment keep the poem moving forward so it feels like a shiny, glittering ornament; but there is always substance and purpose below the decorative surface.

Emma Lee‘s most recent publication is Ghosts in the Desert (Indigo Dreams) and she blogs at http://emmalee1.wordpress.com