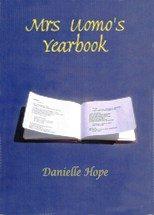 Lately, there has been something of a vogue among poets for the creation of a ‘running character’ who figures in a sequence of poems. Alan Brownjohn may have started the trend with the misadventures of the slightly insecure Ludbrooke; but Peter Phillips has subsequently introduced us to the fictional poet George Meadows and Danielle Hope’s Mrs Uomo has given a voice to those thwarted by authority – particularly by official communications. Following her first appearance in Giraffe Under a Grey Sky, Mrs Uomo gets headline billing in the new collection Mrs Uomo’s Yearbook – but features in only one of the six sections in a book which also includes groups of poems about coastlands, trees and ‘ordinary people’, together with some translations (called ‘Adaptations’) from the Italian. Such a book certainly deserves to be commended for its range.

Some of the Mrs Uomo poems place her in a familiar role as a kind of ‘everywoman’ (or even an ‘everyperson’, although she might not approve of the gender-neutral cop-out). Hence it is perhaps inevitable that some of her observations are a little trite: but her loosely coupled trains of thought also bring us delightful small surprises. For instance, in a meditation on the prefix ‘un’, she reminds us of those everyday words which seem to exist only in their negation: scathed is worse than unscathed. In the same poem, her innate kind-heartedness makes her unwilling to collude with media attempts to uncouple the deserving / from the undeserving poor; and she is sceptical about officialdom’s ability to discern a way through a devious double negative to decide who is not unable to work.

Health has long been an issue for Mrs Uomo – both her own and also, occasionally, that of her friend Mrs Harris.  Hence it does seem a little out of character that perusal of lengthy instructions for hospital visitors should provoke her into a rather anti-social curiosity about whether she is allowed to poke wounds or … steal tissues or towels. But, apart from this lapse, she does emerge as a rounded personality, whose running problems with everything from economics to biscuits is handled with a well-judged lightness of touch. There are times too when Hope is able to add extra weight to her character’s naive observations: Mrs Uomo saves up the elastic bands shed by the post-lady, presumably in the hope of finding a use for them; but as they perish and become useless they serve as a poignant marker of the months passing while Mrs Uomo waits for an operation.

The new departure for Mrs Uomo in this collection comes in the form of the ‘yearbook’ mentioned in the title. There are twelve poems which represent themselves as Mrs Uomo’s wool-gathering meditations on the meanings of the names of the months and also of one or two other adjacent words in the dictionary. Thus a charcterization of January as the guardian god of doors and beginnings leads into further brief reflections on meaning(s) of the words Japan and Jape. This is certainly an original and promising basis for a poem-sequence; but my difficulty with the way that Hope handles it  is that Mrs Uomo is often a rather fleeting and not especially important presence. It is an interesting idea that March might be a reminder of

but the interest is not greatly enhanced by preceding it with Mrs Uomo pictures… Indeed, in many of the poems Mrs Uomo’s only contribution is that of an onlooker; and hence it comes as a surprise when ‘November’ includes quite a long passage in much more familiar vein about mishaps in the supermarket at the self-checkout

This broad humour is untypical. In the main, the yearbook poems are more thoughtful and include some very good passages. February’s polar nights of little sleep / when moons multiply; the (slightly mysterious) observation for July that in the Milky Way over Japan / magpies form a bridge / for banished lovers; or the closing image for November in which distant poplars stand like snuffed candles – all these seem to belong to a different poetic world from the one that Mrs Uomo usually inhabits.

In the rest of the collection there are frequent linguistic flourishes that match the best of the yearbook poems. Among the coast-related pieces, ‘Exodus’ deals with refugees making the desperate crossing of the Mediterranean; and the eloquent line empty shoes carpet the sea links this present-day tragedy with the photographs of the piled up shoes abandoned by victims of the Holocaust. In more upbeat mode, a visitor observes how Brighton is all enthusiasm … language schools buzz and bulge. The depressingly hyphenated attributes of a Llandudno guesthouse run on for nine lines, beginning

As we move on to the tree and landscape poems, we meet more felicitous images and word-choices. A stone wall is cleared of years of moss and overgrown vegetation and then topples like untendoned bones. A painful memory, triggered by the blooming of daffodils, has a trajectory resembling that of the flowers:

As we move on to the next two sections, ‘Ordinary people’ and the rather oddly named ‘Buttons, bus stops, hospitals’ we find a well-observed sketch of passengers on a train

Later, an overheard conversation on a railway platform is the starting point for a shy wily badger of a poem; and another railway station becomes the scene for an elegantly economical six-line portrait of a tired family fierce as territorial magpies / their words peck and tear. Elsewhere, a neglected piano comes into its own only in dreams when in my sleep its untuned notes / played to the wedge of moon. Mrs Uomo’s concerns over health issues are dramatically prefigured in ‘Prescriptions’ when

That sobbing is a good, unexpected word, and so is kerb as an alternative to the more predictable door or gate.

Finally, among the ‘Adaptations’, we learn that The Hen (presumably the Italian name for a stellar grouping) sails through the celestial / farmyard followed by her chirping stars. And Hope will touch a chord for many poets in her splendidly rueful rendering of Eugenio Montale’s ‘My Muse’

When there is so much to speak favourably about, it seems a pity to have to register any reservations. But I did encounter a couple of rather off-putting proof-reading errors: in a poem about rowing I would expect scull rather than skull (unless some very subtle word-play is eluding me); and in ‘Farmhouse’ the cow should surely be enduring a breech rather than a breach birth. More seriously, I do think this book would have benefitted from more rigorous editing. Some of the poems – for instance several rather bland descriptions of places – seem to me to fall some way short of the standard of the finest and might perhaps have been omitted. At 80 pages, the collection is somewhat longer than many I have read recently; and this, coupled with the rather unfocussed titles of some of the sections and the fact that two – or even three – poems are sometimes squeezed into a page, does rather suggest an attempt to include as much as possible rather than a wish to hone the book down to its very best elements.