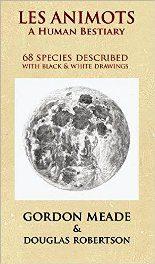 This is a collection that deals with the relationships between humans and other animals, using different species as as a starting point for contemplation. The poet Gordon Meade considers amongst other aspects how we treat animals, the celebration of animals, and animals as a vehicle to examine human society. Each poem is paired with a fine line drawing by Douglas Robertson. Often, when it is examined, the link between animals and man focused on in the poem is found to be replicated subtly in the illustration. Thus in the poem ‘Mouse’ (which reminds us of the notorious grafting of a human ear onto a laboratory creature’s back) the illustration may be viewed in several ways: as the mouse itself but then blending the mouse and ear into a human head. In this way the message of our common bond is highlighted.

The collection is divided into four galleries, thus suggesting a museum of artistic depictions of animals or – more darkly perhaps – display-rooms of stuffed creatures. The poems are deceptively short since they are able in a few lines to highlight quite profound ideas and thoughts. The poet also deploys the technique of concrete forms. Structurally the poems often copy the movement of the animal: for example poems on a snake and a lizard mimic the undulation of one and the skittering movement of the other. The imagery is often arresting and the poet makes skilful use of rhyme to reinforce ideas. Most poems take the form of a reverie using the specific animal as a starting point for an idea. The thought process continues to a powerful last line that often packs a philosophical punch.

Several of the poems deal with the way in which we treat animals. ‘Bear’ is particularly affecting, embellished as it is with a large, gruesome image of a bear collar. The poem reminds us of past cruelties towards animals when we knew no better. Bear baiting is the subject here, but the poem also invites us to consider whether from his modern minimally decorated cell (which we infer is a zoo) the bear is treated any better. The poet’s use of minimally suggests a world of boredom and no stimuli.

The poem ‘Mouse’ dealing as it does with the notorious experiment of growing a human ear on the creature’s back, forces us to face up to the moral issue of such experimentation. By doing so, it challenges our own humanity. The opening lines state the case:

Here the use of he serves to humanise the creature and consequently the horror of what is occurring couched in the words feels even more human which implies that the mouse is at the sharp end of what humans can do to other creatures in the name of science. By labouring the point that growing a human ear in effect makes the mouse par- human it therefore suggests the moral issue that we are experimenting upon creatures who feel pain and discomfort like us. The more philosophical question here is “at what stage does the mouse in fact begin to become human.?”

Gallows humour is deployed throughout these poems . It serves to make us grin but also challenges our behaviour towards animals. The poem ‘Rat’ is perhaps the starkest of these poems on cruelty. It is accompanied again by a powerful double page image of a rat in a laboratory cage that on one level seems to create a triptych thereby reinforcing the moral issues. The poem opens with the grim lines:

The poems then contemplates how, having been taken from its natural environment he – and again the pronoun is used to good effect – is having a crisis of identity. He feels he is in the process of becoming human. The deeper philosophical reference here is to man’s own crisis of identity when imprisoned for long periods or, perhaps more generally, to our collective identity crisis in an increasingly mechanised world.

The poem ‘Cow’ similarly uses black humour to convey the animal’s ultimate destination. The poem begins by debunking the myth that the Cow is neither fat nor stupid. Having established this, we learn that, being sentient, she fully aware of her fate when: they come to herd her into / the back of the lorry. This reminder of an animal’s instincts, especially concerning danger, evokes the full horror of a cow’s final minutes. This is not an anti-meat poem nor are the poems on animal experimentation suggesting that the practice is wrong. The argument is to remind us of the animals’ sentience and their ability to feel – facts that, given our distance from laboratory practices and the processes of making meat, make it easy for us to ignore the realities of both. There is a sense here that we should be grateful for their service to us.

Some poems do celebrate animals. They reinforce the admiration we feel towards them. It should be acknowledged that anthropomorphism is used throughout the collection. It is however a clever device to reinforce the bond between us. In the poem ‘Octopus’ the creature is described in such terms as she was a contortionist, an escapologist whom the audience were enthralled by. The use of a first person narrator here, who speaks about When I first met Octopus, serves again to forge a relationship between man and animal. Many of these studies are the obvious glamour creatures such as the dolphin, great white shark and whale; but perhaps the most interesting poem here is ‘Mountain lion’ which takes this sense of awe at such creatures to a different level. It starts with If you could look deeply /into the eyes of a Mountain Lion /it could almost melt your heart, and there follows a sequence of arresting images linking the lion to a seductress on a bar stool and a pole dancer. The specific words draped and wrapped suggest voluptuousness rather than anything squalid. The idea here highlights and challenges the way we view animals in zoos or even on TV. It hints that we do not see a shared sentience but regard almost pornographically their physical beauty, thus objectifying them. The last line of the poem packs the philosophical point that her act is out of this world, suggesting that if we cared to look beyond the obvious, we would see an almost a modern pantheism in these creatures that would awaken our latent spirituality.

The poem ‘Wasp’ is evidence of the poet’s wit. The verse focuses on the fact that Apparently, Wasp is not one of God’s creatures / instead ‘the Devil created Wasp. There ensues the delicious image of a disgruntled wasp envying the bee’s ability to make honey (a skill he lacks) yet whilst the bee must pay for a sting with his life, the wasp just cheers himself up with another sting. Not only is this amusing, bestowing on the wasp a real sense of character, it also serves to demonstrates – as do all the poems – the detailed research Meade has made into animal behaviour and anatomy. His knowledge matches the illustrations which in the case of the wasp are in an academic tradition recalling Darwin’s journal.

Yet lying beneath all the poems is a human subtext. Anthropomorphism helps to reveal our society, our politics and our psychology. We are grafted onto the poems’ meaning much as the human ear was grafted on the mouse; and they are a device for us to examine human society at distance.

The poems ’Mouse’, ‘Bear’ and ‘Rat’ all serve to emphasis by the motif of imprisonment what it must be for humans to be imprisoned in a man made cage. The rat’s loss of identity mirrors ways in which political prisoners lose their own sense of self after years of imprisonment. These are of course very current ideas. Moreover, the loss of the Rat’s identity hints at the experience of refugees and the psychological effects of their displacement.

Other aspects of human society are also considered. In ‘Cuckoo’ the bird is seen as a free-loader but with the extenuating reasons of its past, where the bird:

Whilst we recognize with amusement the characteristics of the cuckoo, at the same time the connection to human nature is also apparent. This character is a member of the subclass who are demonised by the tabloids, the freeloading benefits scroungers. The poem achieves some skilful double thinking here; it replicates people’s scorn at the individual’s history; yet to a more liberal thinking audience makes us see the real tragedy behind the narrative.

The poem ‘Badger’ is the most politically explicit. Whilst ostensibly focusing on the debate about animal culling, the poem makes the badger stand in for all the downtrodden masses who are at the receiving end of a government initiative. What comes over in the poem is the sense of helplessness felt by the animal, which is just the same impotence we often feel in the face of large institutions whether it be the legal system or government bodies. The poem’s subtext then faces the fact that many in our society today feel that they do not have a voice and all they can do is just lie low until the men with the double-barrels either hit, then go. The specific words the ruling classes clearly target the gulf between, the old Etonians who are currently governing the country and the sub class who seem to be at the butt of every new government cut or initiative.

This is a collection to return to. The poems have layered meanings that often are only grasped on second or third readings. The reader comes away with a sense of a common bond between man and animals. Such a bond can lead to us considering not only social issues but also deeper philosophical concepts such as the relevance of our lives, our origins and our desire for some kind of spirituality. Meade’s words, coupled with Robertson’s exquisite images, make this a book to delight in and savour for years to come.