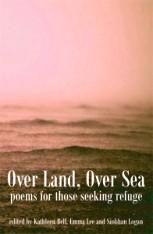 This is a collection of 101 poems, by authors most of whom live in the East Midlands. All the proceeds from its sale will go to charity.

We are in the middle of the greatest refugee crisis since 1945, and it has brought out the worst in some of us. ‘A bunch of migrants’ is how our Prime Minister describes the dispossessed. Several of these poems stress the differences between our lives and theirs, or protest against heartlessness, as in Neil Fulwood’s ‘Ebb’:

If the images of drowned children don’t affect us, a ‘bunch of poems’ certainly will not. But it’s still important that those who can, should record what is happening. Charles Causley defined poetry as a spell against insensitivity, failure of imagination, ignorance and barbarism. Chrys Salt, in ‘The Insurrection of Poetry’, makes the same point.

Yet poets in the comfortable West have a problem when they try to write about things far outside their experience. Dispatches from the front are all, as Jon Stallworthy wrote in ‘A poem about Poems About Vietnam’. I remember several wretched verses about 9/11 and have worked through many more, featuring mud, blood and poppies, which attempt to describe the First World War. But, although the quality does vary, there are some very good poems in this book. Not everyone is just saying helplessly ‘isn’t it awful?’ Some poets come from families of refugees and one, the late Rose Scooler, was a displaced person herself. Her poem ‘Goodbye to Theresienstadt’ is translated from German by her great-niece Sybil Ruth:

It is also possible for some of those who haven’t ‘been there’ to write about the tragedy in ways which are not hackneyed. Anne Holloway describes being on a pedalo off a Greek island with her children when the pedalo begins to sink. Emma Lee tells the true stories of people from the Calais ‘jungle’. David Belbin contributes a ‘broken sonnet’, in the manner of Barry Cole, about cold-hearted politician-speak.

Or you can approach the subject through metaphor, like abandoned teddy bears in a Budapest park (Laila Sumpton), or white mice rocketed to the moon (Mariya Pervez), or asteroids vanishing into black holes (George Symonds). The two outstanding poems in this collection are each an extended metaphor. ‘Callum’s Day’, by Peter Wyton, describes an elaborate funeral procession (which actually happened, I believe) for an abandoned baby:

Everyone is deeply concerned, but the child is still dead.

Another superb poem is ‘So Many Set Out’, by Joanne Limburg, who probably has in mind the slow journey of baby turtles towards the sea:

When the historians look back on this momentous event, it is to be hoped they will find some poetry that makes sense of it.