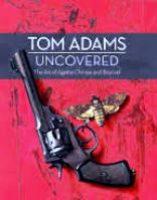 One should not, it is said, judge a book by its cover. But a striking book cover image can certainly draw attention to the book it adorns – which is a necessary precondition for a book to get judged at all. And after a book has been read and judged, for better or worse, a (rather rare) post-condition may be that the art work on the jacket assumes deeper significance as elements in its composition are better understood.

Tom Adams is a fine artist who is probably best known for his trompe l’oeil images on a series of Agatha Christie paperbacks published by Fontana in the 1970s. The handsomely produced volume Tom Adams Uncovered allows us to browse through a generous selection of these evocative images along with apt comments both from the artist and also from writer and Christie-expert John Curran. But the book is much more than an enjoyable recap of a single series of books; it gives an overview of Tom Adams’s long and varied career which has so far spanned more than sixty years and involved portrait painting, advertising work, gallery management and publishing.

The book begins with Adams’s own lively reflections on tensions between the work of an illustrator and that of what might be termed a ‘gallery artist’. Adams admits that it is a particular torment of mine to want to emulate the work of great artists. However, for a book illustrator, the demands of narrative and characterisation mean that art is the servant – not the master. In the end however Adams consoles himself by observing that one can sometimes square the circle and produce work which comes within spitting distance of great art. There is of course the compensating advantage that successful illustrators have access to a constantly renewed worldwide gallery of bookshops in which their work is exhibited. 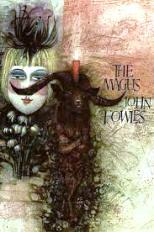 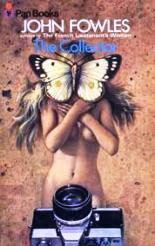 Adams’s distinctive style of cover art had its beginnings when he was asked to provide images for the jackets of three very successful John Fowles novels from the 1960s – The Collector, The Magus and The French Lieutenant’s Woman.  Two of these were made into major films, which of course led to greater exposure of the original covers. 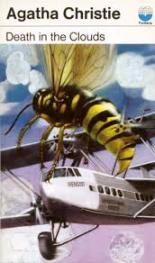 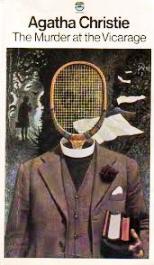 It was the cover of The Collector that led to the Fontana/Christie commission – and from the resulting series the present volume chooses to display many fascinating and surprising examples. Two which particularly show off Adams’s figurative skill, his vivid imagination and his wit are those for Death in the Clouds and The Murder at the Vicarage.

There are around one hundred pages of such images to enjoy; and John Curran neatly sums up the reasons why so many of them are so compelling and memorable: Like the books that inspired them, they are universally accessible, visually intriguing and, ultimately, simple. The word ‘simple’, however, is not meant to detract from Adams’s special talent to combine the mundane with the menacing and to juxtapose the commonplace and the ominous. The artist’s own comments on the paintings are interesting too, as are Curran’s notes on ways in which images were sometimes arbitrarily and amusingly assigned to the wrong title in some foreign language editions! 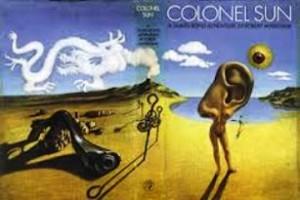 Following his successes with Fowles and Christie, Adams was of course commissioned to do many other book covers – notably one for Colonel Sun, an early and now largely forgotten James Bond pastiche written by Kingsley Amis under the pseudonym of Robert Markham. For such a book it was only fitting for Adams to construct his own splendid Salvador Dali pastiche.

A less well-known book jacket for Barry England’s Figures in a Landscape features a very striking example of Adams making use of sinister ambiguous forms: here the threatening helicopter/dragonfly hybrid puts me in mind of the strange compound creatures described in chapter one of the Old Testament book of Ezekiel. Adams has  also revisited the crime genre with covers for Raymond Chandler books (which, with their hard-boiled, hard-edged style are the antithesis of the apparently cosier Christie settings) and now expresses some regret that Chandler was a much less prolific author.

Although I have dwelt mostly on book covers, it needs to be said that about half of this enjoyable volume deals with other kinds of art work. Adams has also been successful as a portrait painter and has handled a remarkably diverse range of subjects. The book includes likenesses of Benjamin Britten, a young Prince Charles, Richard Dimbleby and the children’s writer Enid Blyton – whose prodigious output stands comparison with that of Agatha Christie.  It is interesting that, in spite of their substantial success (or perhaps because of it) both these women writers have come in for criticism concerning underlying attitudes in their stories. More recently Adams has had the chance to do a portrait of Agatha Christie (although he never met her in person) and also to paint ‘likenesses’ of Hercule Poirot and Miss Marple (something he was not allowed to do on his book covers).

In the final sections of Tom Adams Uncovered we learn that, in the early part of his careerat the Fulham Gallery, Adams combined words and images in a different way by working on collaborative posters with such important poets as Brian Patten, Christopher Logue and Adrian Henri. He has also worked in advertising and worked on a campaign for Bell’s whisky. 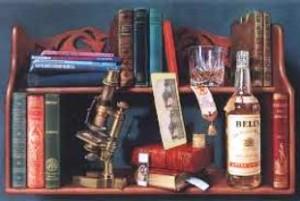 As an end-note to these reflections on Tom Adams Uncovered, I will mention  a small element of real-life whodunnit associated with the Christie covers for Fontana . There are, apparently, just a few examples in the series which were not done by Tom Adams but by another artist, Ian Robertson, who was called in occasionally to mimic his style when the man himself was unavailable. It could be a small project (for another Collector?) to try and track down those rare volumes which are not quite the genuine article…