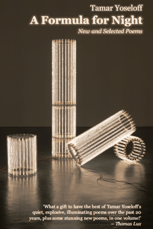 A Formula for Night, Tamar Yoseloff’s new and selected poems, draws on almost twenty years’ writing; so like all such selections it invites the reader to trace how the work has altered.

One path through leads from narrative to lyric; or better, given Tamar Yoseloff’s interest in visual art, from representational to impressionistic and even abstract. Many of the early poems tell anecdotes from childhood and adolescence: the child wandering in Selfridges’ food hall, the boy with the rare Beatles’ record sleeve. What is established at once is the sensory range, and in particular the visual:

It seems as if the pleasure in writing these poems, and certainly much of the pleasure in reading them, is this recreation (or re-imagining) of the sensory experience, the poet exclaiming over the richness of the world. By the same token, in some of this early work the ending can feel forced, as if it’s an additional poetic duty to find and make explicit some deeper meaning. Astrakhan for example ends somewhat piously with the unborn lambs that provided the fur; as if the delight of all those expensive clothes can’t be indulged without some puritan guilt.

By ‘Fetch’ (2007) however, narrative has become something more cloudy and allusive. The fetch of the title sequence is an alter ego, created to stalk some unnamed man, while the poet remains innocently at home. Like all good avatars, the fetch develops an unsettling will of her own. Here the sensory, sensuous detail serves a more complex purpose: we sit by the poet as she scans anxiously the movements of her creation and her prey:

Later still, in ‘Desire Paths’ (2012), one of several collaborations with visual artists, the image of the window with four black panes is replicated over two pages, with two sets of four panels of text, justified to both margins, and each starting We entered the city in autumn. The initial illusion of narrative is disrupted, not only by the alternative narratives, each more disturbing than the last, but by the stream of consciousness:

The final panel/stanza begins We’ll leave the city in autumn, but the charm of the image is again destroyed: the city has become rubble and a burnt-out/shell of a dwelling place. The power of the poem comes at once from the voice of the imagined narrator, moving from observation to self-questioning, from concern for a relationship to awareness of a ruined external world; and from the form, the uncompromising blocks that turn out to be verse, with a subtle metre and a rising and falling structure.

And this is another of the paths through this intriguing volume. The earlier poems are in conventional form, stanzas of five or six lines, mainly in iambic pentameter: not startlingly musical, entirely suited to the straightforward aim of the poem. Fetch, on the other hand, is in terse trimeter, which intensifies the strangeness and darkness of the fantasy. By Ruin, one of the twenty-seven new poems, something far more sophisticated is happening, the poem itself gradually demolished, like a once-grand building more powerful as a ruin. The first version is in four three-line stanzas, which are dismantled in two further stages. Thus:

The effect is both to shift emphasis and to remove even the certainties of grammar.

Already in Marks, another collaboration (2007), the line has been broken up, with irregular indentations, a structure that allows for pauses in breathing, perhaps for doubts. Marks, like poems throughout the selection, returns us to a fascination with the inside of the body, the same as that felt by the child in Selfridges before trays of offal.

Tamar Yoseloff teaches poetry in galleries including Kettle’s Yard and the Royal Academy; not surprisingly, ekphrasis, the description of a work of visual art. The reader may have seen the painting or sculpture already: and if we have, what does the poem add? The Arnolfini Marriage, in the first collection, ‘Sweetheart,’ starts with the poet buying a fish-eye mirror like the one in the famous painting, and moves to the point of view of the bride, hoping to hide her pregnancy. More excitingly, Portrait of a Couple Looking at a Turner Landscape moves between the painting and the viewers:

Hodgkin, Prunella Clough, Peter Doig are all summoned up, obliquely or directly. Jetty ventures into the meditations of the figure in Doig’s painting of the same name:

The power and strangeness of the painting are well evoked. For this reader what the poems adds, what is not on the canvas, is not quite enough, though beautifully phrased:

Jackson Pollock and his work appear in a sequence, The City with Horns, told from the points of view of the painter, his wife, his mistress and finally the poet, viewing a painting in the unlikely surroundings of the Venice Guggenheim. Pollock’s unruly life lends itself readily to this treatment; but perhaps the most interesting passages are less about the depressed bastard than his conception of his art:

that unlaces, with its beginning-of-line stress, is a wonderful image for the breakthroughs of creativity.

Any New and Selected has the poet’s existing fans turning first to the New, to see what has evolved. As well as the excursions around and out of the country, there are experiments in form – Floor uses three rhyme-words in varying order across three triplets and a single line, like a pared-down sestina – and prose poems. There are also three powerful poems about the poet’s mother dying in hospital. Here all the skill accumulated over twenty years or more is put unshowily to work. There are the observations, at once wry and serious:

The forms are straightforward and subtly used. And then there is the unforced imagery, the transformation of fact to metaphor. In Clear Water a daughter is reading Heaney to the man in the next bed: